Linus Gerdemann on August 2nd, 2007 in Lorsch at the Entega Grand Prix

Linus Gerdemann (born September 16, 1982 in Münster ) is a former German cyclist who won a stage of the Tour de France 2007 and the overall standings of the Germany Tour 2008 .

In his youth, Gerdemann only rode mountain bikes . After a traffic accident in 1999 in which he broke his shin, he had to give up this sport. However, since he wanted to continue to do sports and should go to rehabilitation, he switched to the racing bike after he had found one in the basement of a friend and devoted himself to road cycling .

He celebrated his first successes as the winner of the U23 national cycling league in 2003 and 2004 in Team Winfix (later Team Akud ). The former U23 national coach Peter Weibel but denied him participation in the Road Cycling Championship for alleged lack of teamwork. Through the mediation of Dennis force and Jens Voigt he drove since June 2005, for the CSC team of Bjarne Riis . Shortly after his professional debut, he was able to clinch stage victories at the Bayern Tour and the Tour de Suisse against the established world leaders. He was then used by CSC in difficult tours such as the Vuelta a España , where he finished the opening time trial as the best German in 2005 .

In 2006 and 2007 he drove for the UCI ProTeam T-Mobile . In this team he also showed his first successes, such as in 2006 in the Tour of Catalonia and the Tour de Suisse , which he finished seventh overall. In order to comply with the team's new anti-doping guidelines, he ended his collaboration with the controversial physician and trainer Luigi Cecchini .

At the prologue of the Deutschland Tour 2006 , Linus Gerdemann finished second, not even a second behind the first, and was thus the best German driver. He could not confirm this good performance in the further course of the tour and ended up in the middle of the overall classification after losing a lot of time on the top in the two mountain stages.

Gerdemann was able to record his greatest success so far on July 14, 2007, when he won the 7th stage of the Tour de France in the destination Le Grand-Bornand as well as the previous mountain classification at the Col de la Colombière . By winning the stage he received the yellow jersey of the overall leader and the white jersey of the best young rider (which he wore for two days), and he was also voted the most combative rider of the stage.

At the Tirreno-Adriatico 2008 he suffered a double broken leg in the 26 km long individual time trial when he fell into the barrier, but finished the stage in eighth position. He then had to cancel his participation in the Tour de France and the Olympic Games. On his comeback in August 2008, he immediately won a stage and the overall ranking of the Tour de l'Ain . In the time trial of this tour, he finished second behind his teammate Tony Martin .

In the Germany Tour 2008 he won the queen stage to Hochfügen . He thus took the lead in the overall and points evaluation and secured fourth place in the final time trial in Bremen, also winning the overall victory over his teammate Thomas Lövkvist .

He was named Sportsman of the Year by the Sports Association of the City of Münster at the Ball des Sports 2008.

For the 2009 season, Gerdemann was captained by the remaining German ProTeam, Team Milram , and shared this role with sprinter Gerald Ciolek . For Milram he won the overall ranking of the Bayern Rundfahrt 2009 , 2010 the Trofeo Inca and a stage at Tirreno-Adriatico , but could not achieve any successes in the Tour de France .

After the Milram team was dissolved at the end of the 2010 season, Gerdemann moved to the Luxembourg team Leopard-Trek . At the Tour of Luxembourg in 2011 , he won both a stage and overall victory for this team. In 2012 he stayed with the team, which itself merged with the US team RadioShack and in 2012 operated as RadioShack-Nissan . After Gerdemann's contract expired at the end of 2012, he couldn't find a new team for 2013, so he didn't race in 2013.

In 2014 Gerdemann started a comeback for the MTN Qhubeka team . After a mixed season with many health-related breaks, as a result of a strategy change by the MTN Qhubeka team, in the 2015 season he switched to the Danish team Cult Energy Vital Water , which rose to the ProContinental category , for which he won the Tour of Luxembourg . This team merged into the Stölting Service Group team in 2016 .

When he couldn't find a new team for the 2017 season after the Stölting team dissolved, he ended his cycling career. He runs a restaurant in Mallorca . 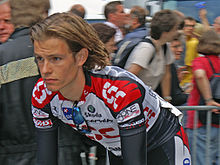 Commons : Linus Gerdemann  - Collection of images, videos and audio files
Overall winner of the Deutschland Tour and its previous events

The Germany tour was not held continuously.