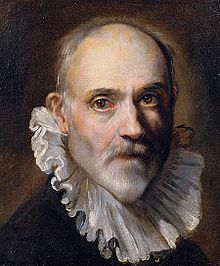 Self-portrait in the Residenzgalerie Salzburg 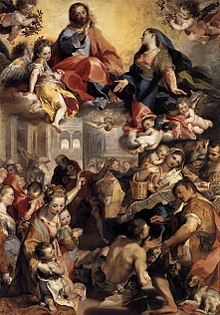 He received his first training in the workshop of his father Ambrogio di Federico Barocci, a sculptor from Milan and grandson of the important Milanese sculptor Ambrogio da Milano . Then he acquired a basic knowledge of painting from Battista Franco , called Semolei (1498–1561). He then worked for his uncle, the architect Bartolomeo Genga (1518–1558) in Pesaro , who taught him the problems of geometry and perspective.

Cardinal Giulio della Rovere (1533–1578), brother of the Duke of Urbino, Guibaldo II della Rovere , brought Barocci to Rome in 1548, where he could devote himself to studying the works of Raphael and Corregio . A few years later Barocci returned to Urbino, where he carried out numerous works, such as the paintings “Saint Cecilia” and “Martyrdom of St. Mary, created for the Cathedral of Urbino in 1557 ”. Sebastian ”, which still clearly reflect Correggio's influence.

In 1560 he was back in Rome, where he is documented in the workshop of the brothers Taddeo and Federico Zuccari , who were the main representatives of Mannerism in Rome in the second half of the 16th century. In 1560 he and Federico Zuccari painted frescoes in the newly built casino and belvedere in the Vatican Gardens on behalf of Pope Pius IV . The "Four Virtues" painted by him show his extraordinary talent, which sets him apart from the abundance of contemporary Roman painters.

In the course of this work he fell seriously ill. Giovanni Pietro Bellori supports Barocci's suspicion that he was poisoned by colleagues who envied his talent. Weakened by illness, only a few works were created over the next few years. He returned to Urbino in 1563 or 64 and enjoyed a high reputation, also thanks to his ducal patrons, although his health remained frail and his contemporaries described his demeanor as sullen and hypochondriac. Barocci received numerous commissions from clerical and secular dignitaries to paint church and devotional pictures.

All attempts by the Spanish King, Duke of Tuscany or Emperor Rudolf II to bring him to their court during this period were rejected by Barocci: he stayed in Urbino for the rest of his life and developed his own distinctive painting style here. The paintings “Beata Michelina” and “Madonna del Gatto” in the Albani Museum in Urbino can be assigned to this middle period, since the echoes of Correggio are still too clear here. The latter is just a copy made by Carlo Roncalli, while the original of the “Madonna del gatto” is in the National Gallery of London.

The Collegio della Mercanzia of Perugia (1567–68) ordered a “Descent from the Cross” for their chapel in the Cathedral of Perugia near Barocci, which the artist delivered in 1569. This picture represents an early high point of his work and, in terms of composition and color, is already reminiscent of the baroque painting of Rubens or Van Dyck .

His picture “Rest on the Flight” from 1570/75 in the Pinacoteca Vaticana (Rome) is intended as a devotional picture or as an object for collectors because of its small size. Mild colors and a clear sfumato indicate that Barocci preceded each of his pictures with detailed pastel designs , the soft transitions of which he used as a model for his pictures and which made him the founder of an independent pastel painting.

Barocci held a special position in his time, as he was able to overcome the academic style of Mannerism and at the same time heralded the Baroque with his pictures in composition and color. Although he spent the last forty years of his life exclusively in Urbino, and although most of his cultural creation was concentrated in Rome, Barocci's painting had a decisive influence on the development of painting around 1600 throughout Italy and beyond, also because he was faithful artistically implemented the regulations of the Trident Council for sacred art in his pictures. In his late work in particular, there are increasing tendencies towards spirituality and contemplation.

Barocci had numerous students and collaborators, including Antonio Cimatori , Giovanni Laurentini , Vincenzo Pellegrini , Alessandro Vitali and Antonio Viani , to name but a few. 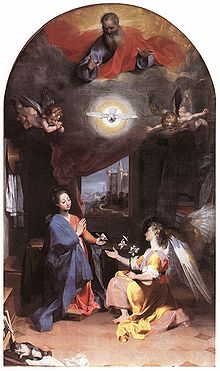