Self-portrait by Melozzo da Forli on one of his frescoes

Melozzo da Forlì , also Michelozzo di Giuliano degli Ambrogi (born June 8, 1438 in Forlì ; † November 8, 1494 ibid) was an Italian painter and architect . Along with Piero della Francesca and Luca Signorelli, he was one of the most outstanding Central Italian representatives of the Quattrocento . His frescoes are famous for the precise application of perspective foreshortening.

Little is known about Melozzo's childhood and youth, he probably came from a long-established and quite wealthy Forlìs family called Ambrogi. His apprenticeship is also in the dark. It is possible that he received his artistic training from Ansuino da Forlì and who was able to convey to him the knowledge of perspective representation practiced in Padua in the vicinity of Giotto. Perhaps this also introduced him to the works of Pierro de la Francesca and Andrea Mantegna . His influence by Mantegna should later be clearly shown in his most famous painting Sixtus IV. Appoints Platina prefect of the Vatican Library (1477). Baldassare Carrari the Elder is also conceivable as a teacher . At that time Melozzo had certainly also got to know the work of another pupil of Giotto di Bondone - Guglielmo degli Organi.

Melozzo is documented for the first time in his hometown between 1460 and 1464.

Melozzo lived in Urbino between 1465 and 1475 and there came into contact with the work of Piero de la Francesca, whose monumental figure representation he took over from then on. In Urbino, Melozzo, for his part, exerted a great influence on Joos van Wassenhove and Pedro Berruguete , with whom he may have worked on the decoration of the Studiolo in the Palazzo Ducale . Two fragments have survived from the Urbino period between 1466 and 1470 and are now kept in the Uffizi Gallery in Florence - the Annunciation and the Annunciation . The panel painting Salvator mundi is also only available in fragments. It is still disputed whether the painting from this period can be attributed to Ritratto di Federico da Montefeltro col figlio Guidobaldo Melozzo. 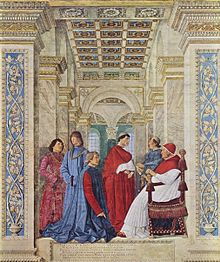 In 1475 Melozzo returned to Rome, where he was appointed court painter by Pope Sixtus IV . The fresco Sixtus IV was created here in 1477. Appoints Platina Prefect of the Vatican Library , in which Melozzo painted a representative, monumental and sharply characterizing group portrait of the Pope and members of the Della Rovere family , following the example of Andrea Mantegna's for the Gonzagas frescoes created in the Palazzo Ducale in Mantua . 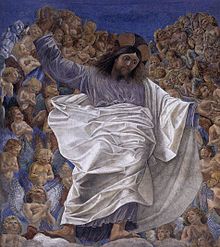 Between 1477 and 1480 ceiling paintings were created in the tribuna of Santi Apostoli, the center of which is the Ascension of Christ . The figure of Christ is shown in very skilful foreshortening, and the host of angels surrounding him also shows a great mastery of the most varied perspectives. This fresco can definitely be counted among the forerunners of the later illusionistic ceiling painting. After the death of Sixtus IV in 1484, Melozzo left Rome and moved to Loreto .

In Loreto, Melozzo worked from 1486 on the treasury of the sacristy of San Marco in the Basilica of the Holy House . The walls were painted with pseudo-architecture and the flat pseudo- dome was illusionistically inflated. Prophets of the Old Testament are depicted seated on the border cornice ; large angels float into the room through the openings in the dome caps, holding Christ's instruments of suffering in their hands. This arrangement chosen by Melozzo would later inspire Michelangelo's ceiling painting in the Sistine Chapel in Rome.

Arriving again in Rome in 1489, Melozzo made a mosaic of Jesus blessing the evangelists in the Chapel of Saint Helena in the Church of Santa Croce in Gerusalemme . Byzantine influences are no longer noticeable in this work. The fresco The Doctors of the Church , executed at the time in the Basilica of Santa Francesca Romana (near the Colosseum ), is attributed to the Melozzo district.

In 1493 Melozzo stayed in Ancona , where he was busy with ceiling decoration work at the Palazzo Comunale, which was lost. He then returned to Forlì, where he and his student Marco Palmezzano painted the Feo chapel of the Church of San Biagio. This plant was destroyed by bombs during World War II.

Melozzo died in Forlì on November 8th 1494, his tomb is in the church of Santissima Trinità in Forlì.

Most of the pictures attributed to Melozzo have only survived in fragments. Melozzo, however, was famous as one of the inventors of the technique of extreme foreshortening, an achievement on par with that of his contemporary Andrea Mantegna .