The Basilica Santi Apostoli , also Santi XII Apostoli ( Latin: Sanctorum XII Apostolorum ) is a church in Rome that was founded in the 6th century and renovated and supplemented several times until 1827. It is the parish church of the same parish and titular church of the Roman Catholic Church and contains u. a. the tombs of Pope Clement XIV , four cardinals and the composer Girolamo Frescobaldi . The church was the family church of the Roman Colonna family and is considered "the last of the great Roman basilicas". Officially, it bears the title Basilica minor .

Santi Apostoli as seen from Vittoriano

The basilica is located in the Roman Rione Trevi and thus in the historical center of Rome on the Piazza dei Santi Apostoli of the same name, about 200 m north of Piazza Venezia . It borders directly on the Palazzo Colonna . At the back of the basilica is the Pontifical Biblical Institute in Via dei Lucchesi .

This is the place where Pope Julius I built the Basilica Iulia, named after the builder , in the fourth century . In the 5th century it appeared as the titulus apostolorum . Since the relics of the apostles Philip and James, son of Alphaeus are kept in it, the church and the cardinal title was called Santi Filippo e Giacomo.

It is believed that Pope Pelagius I founded the church around 560 in gratitude for the expulsion of the Goths from Rome. Numerous modifications and extensions followed over the centuries. The last, almost complete renovation from 1702, which is still influential today, was planned and started by Francesco Fontana and continued after his death in 1708 by his father Carlo Fontana until 1714.

The church was built as a basilica , i.e. three aisles with a raised central nave without a dome . A total of six side chapels open to the side aisles . These carry lanterns over their domed vaults, so that the lighting of the basilica is unusual in that the aisles are not, as is so often the case with three-aisled churches, "in the dark", but are lit from the side.

Two vaults of the portico and right narrow side

The lower part of the facade is dominated by a double portico. This was carried out by Baccio Pontelli in 1475 . Here ten pre-blinded octagonal pillars seem to support nine vaults; in fact, this task is taken over by the square pillars behind. On the narrow left side of the portico there is a monument to Giovanni Volpato , created in 1807 by Antonio Canova . The narrow right side contains an antique marble slab from the Trajan's Forum , depicting the Roman legionary eagle with a crown of oak leaves . The motif is supposed to be the “archetype of a long series of European state symbols”. The vestibule contains a number of other remains from ancient and medieval art history. The floor above was changed from 1702 in the course of the redesign of the front side of the basilica by Carlo Fontana by inserting windows into the originally open row of arcades . The gable of the front side was built in 1827 by Giuseppe Valadier and given a rather inconspicuous structure of pilasters . 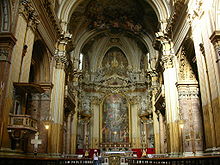 View to the main altar 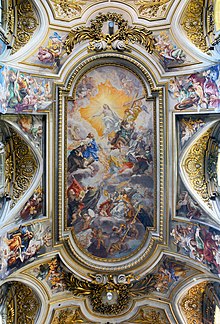 Inside the long basilica (the length of the central nave is 63 m), the basilica's heavy pillars with double pilasters structure the sides of the room. These open up in high arcade arches to the side aisles, also designed as double pilasters. In the area of ​​the choir and the apse, columns support the balustrades above . The interior is richly designed in the late Baroque style. The colors white and gold as well as lush gold-leaf stucco decor dominate . The ceiling is a barrel vault , which is broken through by windows above the surrounding cornice. The fresco of the central nave vault depicts the triumph of the Franciscan Order and was executed in 1707 by Giovanni Battista Gaulli , known as “Baciccia”.

Until the renovation in 1702, the apse contained frescoes by Melozzo da Forlì , created in 1472. These were destroyed in the process, fragments of which are in the Quirinal Palace and the Vatican Art Gallery . The current ceiling fresco of the apse was created by Giovanni Odazzi and depicts the revolt of the angels . The painting of the main altar was made by Domenico Mutatori in 1704, it depicts the martyrdom of St. Philip and James and is considered to be the largest panel in Rome.

The Pope's grave is at the front of the left aisle; it was created by Antonio Canova in 1787 , as his first in Rome. The emerging classicism can be clearly noted in the work, the sarcophagus is a classicist element, the figure of the Pope depicted above with the accompanying allegories ( humility (left) and gentleness (right)) is still clearly indebted to the baroque.

Tombs of the cardinals Pietro Riario and Raffaele Riario

Cardinal Pietro Riario died in 1474, his tomb is the joint work of Andrea Bregno , Mino da Fiesole and Giovanni Dalmata . This tomb is located on the left side of the nave near the choir. Cardinal Raffaele Riario is buried on the right ; his tomb is said to have been made according to a design by Michelangelo .

Cardinal Bessarion , a well-known humanist , died in 1472. Above his tomb there is a round relief with its side profile. It is located in the direction of the main altar on the second pillar of the left aisle.

The Vatican diplomat Agostino Casaroli had the church of Santi XII Apostoli as a titular church and was buried here after his death in 1998.

The eminent composer and organist of the early Baroque Girolamo Frescobaldi died in 1643. He was a simple marble buried grave disk.

The Capella Odescalchi was executed by Ludovico Sassi , a student of Carlo Fontana. It is remarkable that the entire floor is made of mosaic , this represents the coat of arms of Pope Innocent XI. represent.

This chapel, behind the Capella Odescalchi, was lost for centuries until its rediscovery in 1959 and has only been accessible since 2014 (Friday and Saturday 9:00 a.m. to 12:00 p.m.; entrance fee). The burial chapel was built for Cardinal Bessarion in the middle of the 15th century . The wall frescoes, only partially preserved today, are some of the most important examples of Renaissance painting. They are attributed to Antoniazzo Romano in collaboration with Melozzo da Forlì . Almost nothing has survived from the choir of angels in the vault of the apse. The two surviving frescoes in the upper part of the apse show scenes related to the Archangel Michael as protector against evil (the Turks).

The better preserved picture on the right shows Saint Aubert , Bishop of Avranches, in bishop's robes , in a solemn procession, accompanied by two ecclesiastical dignitaries. On the right in Fig. 6 you can see Franciscan and five Basilian monks in black. The saint shows the facial features of the French King Louis XI. The two dignitaries behind the saint are: Francesco della Rovere, who later became Pope Sixtus IV , dressed in purple , and his nephew, Giuliano della Rovere, who later became Pope Julius II , in purple .

The organ was built in 1925 by the Mascioni organ building company and expanded in 1955. The instrument has 46 registers on three manuals and a pedal . The actions are electric. The works are divided into two sections: The manual works are located behind the main altar. The pedal registers are located in a side housing.