The Roman Walls of Milan

There were three city ​​walls in Milan : the Roman one, which was expanded towards the end of the imperial era, the medieval one and the one from the time of Spanish rule. Few remains of all three remain, but they have left traces in the city's road system.

49 BC Mediolanum was named a Municipium and subsequently received its first wall wreath: a rectangle about 700 m side length with cardo and decumanus and today's gates Porta Romana, Porta Ticinese, Porta Vercellina, Porta Orientale (or Argentea) and Porta Jovia and Porta Cumana (or Comacina or Comensis) in the north. 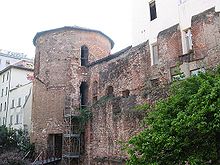 Rest of the Roman wall

Under Emperor Diocletian , Mediolanum became the capital of the western Roman half of the empire in 286 and his co-emperor Maximian had the city walls extended by around 1,100 hectares. Small parts of this 11 meter high wall have been preserved to this day.

In 1156 work began on the medieval city wall, initially as a wooden palisade with a deep moat. After the city was taken by Friedrich Barbarossa (1162), work began on a new wall wreath with seven main gates around 1171: Porta Ticinese , Porta Vercellina , Porta Giovia , Porta Comasina , Porta Romana , Porta Nuova and Porta Orientale . There were also ten or twelve side goals. (One such side gate was called Pusteria). The medieval moat lasted until the beginning of the 20th century in the form of a system of canals from Navigli , but was filled in and replaced by roads in the interwar period. The old Porta Nuova has been preserved. 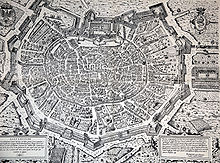 The so-called Spanish walls were started by order of Governor Ferrante I. Gonzaga and completed in 1560.

The medieval Porta Nuova, remodeled in 1861

The medieval Porta Ticinese, redesigned by Camillo Boito in 1865

In 1796 there were eleven main gates:

In the 18th century, the city walls lost their military value and increasingly became a barrier to traffic. In the 19th century, however, the monumental (and more traffic-friendly) design of the city gates began, beginning with the brief period of the Napoleonic era in which Milan was the capital of Italy. With the expansion of the city of Milan in 1873, the city gates lost their fiscal function as a consumption tax limit. In 1885 the demolition of the Spanish bastion fortifications began, to which, for example, the Porta Vercellina fell victim. The majority of the gate structures were retained. In some cases, medieval gates were also redesigned in the spirit of historicism .