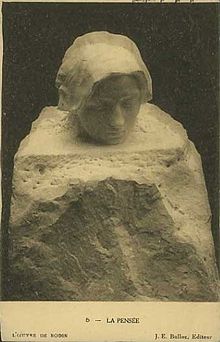 As a non-finito (from the Italian as much as "unfinished") is the art or sculpting an unfinished sculpture called.

The difference between a torso and the non-finito is that the artist has used more material than is necessary, and that the sculpture still has unprocessed parts, whereas a torso has “cut off” parts whose mental continuations (often arms or Legs) should never be part of the finished sculpture.

“Non finito” was used from 1435 in connection with the first hand drawings , which from this point on were considered an independent art form. The fact that there is “nulla linea” (“no line”) in nature led the artists of this generation to recognize in it the highest form of abstraction. At the same time, the artists of this epoch “assumed” that the recipient would be able to see through something that was not formulated entirely in drawing (drawings per se cannot be naturalistic, but watercolor painting and pastel). Leonardo da Vinci pointed out in his treatises that the non-finito means a high artistic and intellectual achievement. In neurology, this fact was considered to be proven approx. 550 years later; perceptual filling-in is a term that stands for this performance of the brain.