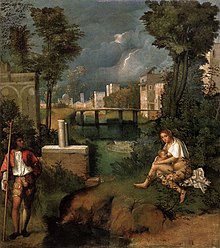 There are hardly any documents about Giorgione's life: the biographer Giorgio Vasari named in the first edition of his biography - published in 1550 - the year of birth 1477, in the second edition of 1568 he corrected the date to 1478.

Giorgione studied together with Tizian in the workshop of Giovanni Bellini in Venice. After his return to Castelfranco he painted the altarpiece Madonna with Saints Francis and Nicasius , known as Pala di Castelfranco, for a chapel in the parish church of San Liberale in 1504/1505 on behalf of Condottiere Tuzio Costanzo . Costanzo had donated the portrait in honor of his son Matteo Costanzo, who died unexpectedly in 1504.

Around 1505 Giorgione returned to Venice, where he executed numerous, now destroyed frescoes on house facades. Verifiable biographical data also relate to payments made to Giorgione by the Council of Ten in Venice: the artist received a payment of 20 ducats on August 14, 1507, and an additional sum of money on January 24, 1508 for a canvas painting in the audience chamber of the Doge's Palace . On November 8, 1508, the head of the Salt Office had to decide on the facade painting on the Fondaco dei Tedeschi (fragments in the Ca'd'Oro and in Saltwood Castle, Kent) on the Grand Canal. Titian was also involved in this work under the direction of Giorgione. On December 11, 1508, three painters commissioned as experts set the fee at 150 ducats. Giorgione received an amount of 130 ducats.

Giorgione died in Venice in 1510 as a result of a plague infection . His death is only recorded in a letter from Isabella d'Este , so that a contract relationship can be assumed.

Of the artist's easel pictures are still authenticated: the so-called. Giorgione's family, three figures in a landscape, with which he created the first pure landscape picture in Italian painting, and the three philosophers in a mountain landscape (Vienna, Kunsthistorisches Museum). In addition, due to the similarity in style with the above paintings, he is still credited with: the concert (Florence, Palazzo Pitti), three life-size half-figures, the ordeal of little Moses, the judgment of Solomon and the portrait of a Knight of Malta (Florence, Uffizi), Madonna with Antonius and Rochus (Madrid, museum), Christ carrying the cross (Vicenza, Casa Loschi), male portrait (Rovigo), Apollo and Daphne (Venice, Seminario della Salute) and sleeping Venus (Dresden, gallery). The Venetian nobleman Marcantonio Michiel lists twelve paintings and one drawing as works by Giorgione in his “Notes of the opera del disegno”, which was created between 1520 and 1543. 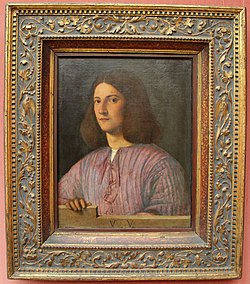 Portrait of a young man, around 1505/06, Gemäldegalerie Berlin

Giorgione's works belong to the stylistic epoch of Venetian painting . In his short life he created a number of masterpieces within this epoch: Great creative power, a high perception and a rich poetic imagination combined with a rare talent for color are the hallmarks of Giorgione's artistic personality. What is special about his style of painting is that he largely dispenses with outlines - more decisive for the artist is the elaboration of color transitions.

With his complete works, which corresponded to the ideas and needs of the time, the artist produced a style called Giorgionism. The followers of Giorgionism included: Marco Basaiti , Vincenzo Catena , Giovanni Girolamo Savoldo , Girolamo Romanino , Bartolomeo Veneto , Giovanni Cariani , Palma Vecchio and Bonifazio Veronese . Giorgionism also came from Venice to Ferrara , where it influenced the painting style of Dosso Dossi . And in the 17th century Pietro della Vecchia became interested in Giorgione as an Italian Baroque painter.

In Giorgione's birthplace, Castelfranco Veneto, there is a monument from 1878 and the Museo Casa di Giorgione. On the occasion of the opening in 2009/2010, a special exhibition was held that showed works by the artist that were otherwise exhibited separately as an ensemble. 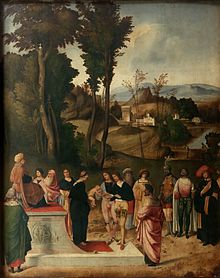 The Trial by Fire of Moses , 1505, Uffizi Gallery , Florence 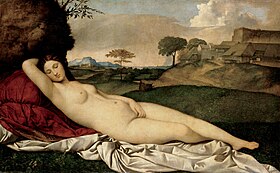 The body of Christ supported by an angel (Engelspietà). around 1510
Oil on canvas, 76 × 63 cm; The painting was completed by Titian

Rural concert, around 1505-10.
Oil on canvas, 110 × 138 cm, here the attribution fluctuates between Giorgione and Tizian

An attempt was made to assign drawings to Giorgione. However, these assignments are inconsistent and should be viewed with caution.

Landscape with a fort. (auctioned on July 5, 2005 at Christie's in London)