Via Appia Antica on the southern outskirts of Rome

Due to the many historical buildings and tombs along the street, it is considered the longest museum in the world.

History and course of the road

The Via Appia was built in 312 BC. Created by Appius Claudius Caecus . It begins in Rome at Porta Capena and originally only ran for 195 kilometers to Capua . Around 190 BC The road was extended to Brundisium (today Brindisi ), which became the most important transshipment point for goods and slaves from the Orient . The Via Appia thus became one of the most important trade routes in Italy and the Roman Empire. It is no coincidence that it was given the nickname Regina Viarum , "Queen of the Streets", in ancient times .

Between the Piazza di Porta Capena and the Porta San Sebastiano (formerly Porta Appia ) it is now called Viale delle Terme di Caracalla and Via di Porta San Sebastiano . From there it leads as Via Appia Antica to the Basilica of San Sebastiano alle Catacombe and past the Maxentiusvilla to the tomb of Caecilia Metella . From then on it is closed to general traffic and in some sections still shows the ancient pavement. It continues past the Villa of the Quintilians and an Emporion , which was wrongly interpreted as a Temple of Hercules for a long time , until it finally reunites with the Via Appia Nuova to Via Appia SS 7 in Frattocchie, a district of Marino .

Tombs along the Via Appia Antica 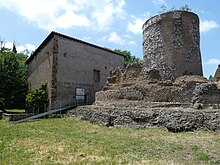 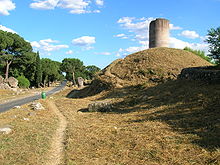 Since a Roman law, the Twelve Tables Law, stipulated that no dead could be buried in the area of ​​the housing estates, this was usually done along the arteries. Since the Via Appia was one of the most important roads, it gave those buried here or their families a good opportunity to represent their reputation and property with their grave structures. Therefore, not only are many graves laid along the Via Appia, but above all a number of large grave monuments have been erected. The tomb of Caecilia Metella or Casal Rotondo are particularly well known .

As a rule, there are three types of graves that can be visited here on the Via Appia:

In the church tradition, the Via Appia is also the road on which Peter finally returned to Rome: “ Domine, quo vadis? “At the beginning of the Via Appia there is the chapel of Santa Maria in Palmis .

Commons : Via Appia  - album with pictures, videos and audio files