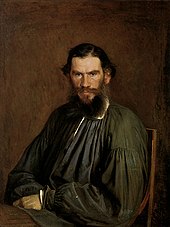 An exile , even God sees the truth, but does not tell it immediately and God's mills grind slowly ( Russian Бог правду видит, да не скоро скажет , Bog prawdu widit, da ne skoro skaschet), is a short story by Lev Tolstoy , first published in 1872 appeared in the monthly Moscow magazine Besseda . In the same year the text was printed in Tolstoy's 3rd volume of the alphabet reader for school children in Saint Petersburg . The author thought the little story was one of his best. Vasily Surikov created illustrations for the story. The text is one of the Tolstoic stories that Mahatma Gandhi translated into Gujarati in 1905 for his newspaper Indian Opinion . In 1916 Nikolai Larin filmed the material under the title chosen by Tolstoy.

Ivan Dmitrijewitsch Aksenow, a wealthy, enterprising young merchant from Vladimir , is leaving to visit the Nizhny Novgorod fair, although the omens are unfavorable. Ivan's wife saw her husband in a dream with graying hair. The dream comes true: When Aksenov moves into the same room in the hostel with a Ryazan merchant he knows on the outward journey , the friend is stabbed and robbed. Before the bloody act, Aksenov had traveled on in the middle of the night, was found en route by law enforcement agencies and the instrument of the murder, a blood-stained knife, was found in his travel bag.

Aksenov's wife's petition to the Tsar was unsuccessful. Aksenov does not understand his wife's faint doubt about his innocence and has to serve twenty-six years of katorga in Siberia . Before that, he gets knackled.

When, in the twenty-sixth year of imprisonment, Makar Semyonovich was brought in from Vladimir, and from where he was from? How so? When asked, Aksenov cannot, to his horror, exclude from the replies that the newcomer is the murderer of the Ryazan merchant. Out of sheer anger and pain, Aksenow can hardly contain himself for the next two weeks. Makar has already dug a tunnel out of the dungeon and wants to take Aksenow with him on the run. Makar wants to kill Aksenov in case he betrays him. Aksenov refuses the offer to flee because he has lost contact with his family. When the excavation is discovered, Aksenow is silent when asked about the earthworker.

In an interview with Aksenov, Makar admits the murder of the Ryazan merchant and asks for forgiveness. Aksenov cannot forgive, but he thinks God will forgive Makar. Aksenov only thinks about his death.

Makar confesses to his murder. By the time Aksenov's written acquittal finally arrives at the katorga, the innocent has already died.

Novellas: The Cossacks  | How much earth does man need?  | The death of Ivan Ilyich  | The Kreutzer Sonata  | The devil  | The fake coupon  | Hajji Murat  | Family happiness

Philosophical Writings: Critique of Dogmatic Religion  | My confession  | What my faith consists of  | The kingdom of heaven within you  | What is art  | Against modern art  | About upbringing and education  | What people live on

Dramas: The Power of Darkness  | The living corpse  | And the light shines in the darkness (unfinished)

Stories and Short Stories: The Raid  | The felling  | Sevastopol cycle  | The snowstorm  | A Landlord's Morning  | Two hussars  | The degraded  | Lucerne  | Albert  | Three deaths  | Polikushka  | An idyll  | The prisoner in the Caucasus  | Yermak and the conquest of Siberia  | God sees the truth, but does not immediately say it  | The bear hunt  | My dogs  | The canvas  knife | The two old  ones | Where there is love, there is God too  | Child wisdom and man's folly  | Don't let the spark become flame  | The candle  | The three old men  | The repentant sinner  | Ivan the Fool  | The egg-sized grain  | The first brandy burner  | Ilyas  | The enemy is tough, but God is strong  | The two brothers and the gold  | The servant Jemeljan and the empty drum  | The baptismal son  | Folk tales  | Russian farmers  | Life  | Cruel amusements  | The dream of the young tsar  | Master and servant  | Father Sergei  | War and Revolution  | For every day  | The great crime  | After the ball  | King Assarhaddon  | Alyosha the Pot  | The Posthumous Notes of Starets Fyodor Kuzmich  | The divine and the human  | Kornej Wasiljew  | Three questions  | Records of a madman  | Power of the child  | The stranger and the farmer  | Songs in the village  | Who are the killers?  | The monk-priest Iliodor  | Thankful ground  | All the same  | Chodynka  | Three days in the country  | For what?  | What I saw in the dream  | Father Vasily