Pierre-Joseph Proudhon [ ˈpjɛʀ ʒoˈzɛf pʀuˈdɔ̃ ] (born January 15, 1809 in Besançon , † January 19, 1865 in Passy , Paris ) was a French economist and sociologist . He is considered to be one of the first representatives of solidarity anarchism . He campaigned for the abolition of exploitation and the rule of man over man, as well as for mutualism and federalism .

Some of those who developed his theory are also referred to as Proudhonists .

Pierre-Joseph Proudhon was born in Besançon , Doubs department in the Franche-Comté region . He was the son of a cooper and a kitchen maid and worked as an ox herder until his twelfth birthday. A scholarship enabled him to attend school, which he had to end early due to lack of money. He learned the profession of typesetter and continued his education as an autodidact. When he went to Paris, he became the author of many works in the fields of socialism and political economy, including with Karl Grün , Arnold Ruge , the son of Fichte and in Paris with the members of the Société d'Économie Politique (Secretary : Garnier) wrong. His later publisher, Guillaumin, founded the Journal des Économistes in 1841 . 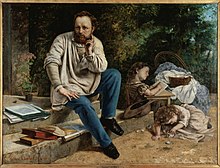 In the February Revolution of 1848 he met Mikhail Bakunin and, as a member of the French National Assembly, developed a work program. He strove for a development towards socialism without violence, supported by the free decision of the workers. Proudhon rejected all state violence and shaped the anarchists' conviction that the unlimited freedom of people was the basic requirement for a socialist order:

“Human exploitation, someone has said, is theft. Well! Man's government by man is slavery! "

During the revolution, Proudhon perceived a tendency towards state socialist ideas, which he opposed in particular in the person of the “government-mad Louis Blancs ”.

Pierre-Joseph Proudhon died in this house

After Louis Blanc found a much larger following in the population, Proudhon tried Napoleon III. in support of his plans to win, in which he hoped that Napoleon III. to the "representative of the revolution against will" could become.

In 1849, Proudhon tried to put his reform program into practice by founding a “ Volksbank ” which grants free credit. After six months, however, Proudhon had to close the Volksbank again as he was arrested and imprisoned for three years for two press releases.

Karl Marx initially valued Proudhon, whom he met several times in Paris in 1844/45, and praised Proudhon's "astute work" (Communism and the Augsburger Allgemeine Zeitung) and, in the Holy Family, his attacks on property (Qu'est-ce que la propriété?) as a progress that revolutionized national economy. During the time of the Communist Correspondence Office, Marx asked Proudhon's cooperation (letter of May 5, 1846); However, the latter refused in his reply of May 17. On the one hand, Proudhon turned against the use of revolutionary force; on the other hand, he warned Marx against authoritarian means and objectives.

To Proudhon's Contradictions économiques (subtitle: Philosophy of misery ) published in October 1846, Marx responded in 1847 with the misery of philosophy . Marx sharply criticized the philosophical and scientific inadequacies that emerged in the writings of the autodidact, which were widespread in France; Likewise, his recurring moralizing approach was disgusting to him (e.g., instead of determining the economic value of labor , Proudhon strove to determine and achieve fair wages ). Instead of measuring the existing relationships against a norm, Marx was more concerned with pointing out the internal contradictions of the existing relationships (especially between capital and labor) and developing practical social criticism from them.

The different standpoints between Marx and Proudhon marked the division of the labor movement in several ways: into supporters of direct action and non-supporters, supporters of a social revolution; of the revolutionary strike (anarchists, Blanqui's supporters and Marx 'supporters) and supporters of a gradual renewal of society (pure reform movements) and in anarchists and “statists” ( state socialism ).

Pierre-Joseph Proudhon died on January 19, 1865 in the house number 12, Rue de Passy in Passy and was buried in the Montparnasse cemetery.

In this work Proudhon draws the conclusion: property is theft . Private property is meant as a privilege or monopoly, in the sense of: "As long as property holds privileges, privileged - that is, extortionate - property means theft". In addition to personal means of work, one may only own those goods which one has produced through one's own or collective labor or acquired in exchange for it. Exploitation of the labor of others should be prevented in order to prevent the resulting accumulation of capital and concentration of power. The society should be based on the voluntary amalgamation of decentrally organized, manageable units ("fédéralisme"), i.e. a system free of domination without state and church .

Proudhon was one of the first to use the term anarchy in a positive way. Proudhon defines “anarchy” based on the original meaning of the word as “absence of every ruler, every sovereign” and concluded “that is the form of government that we are getting closer to every day (...) as man seeks justice in equality, so seeks society the order in anarchy. "

This work went on sale on October 15, 1846 and initially attracted little attention; it was not until the February Revolution that it became a best seller. In his work the author combines reflections on metaphysics, political economy, socialism and sociology. The hypothesis of the existence of God is essential in order to explain the order and progress of history and to guarantee reliable knowledge in general. Contradictions or antinomies exist everywhere, such as between use value and exchange value; Synthesis: the "constituted value" with which the labor value is measured.

Proudhon was inspired to do this by asking questions from the Académie des Sciences morales et politiques :

Proudhon understood socialism as the science of freedom. Politics, on the other hand, as the struggle for power in the state, presupposes, with the latter, the domination of man by man, hence suppression; the highest perfection of society can be found in the union of order and anarchy.

Proudhon's writings influenced numerous intellectuals of his time, but above all the emerging trade union movement in France, which remained anarchist-oriented for a long time and found expression in anarcho-syndicalism .

The criticism of Karl Marx

In 1846/47 Karl Marx had come to terms with himself. The publication of the Système des contradictions économiques offered him a welcome opportunity to present the main features of his own historical and economic views in a criticism of one of the most famous French socialists at the time. As a result, Marx's Misère de la philosophie first appeared in French, but initially received little attention in France. Proudhon saved himself the trouble of publicizing Marx's criticism by giving an open answer. His marginal notes on Marx's work have survived, however: Proudhon is often unable to recognize the differences that Marx's criticism wants to see between the two positions.

According to Marx, nothing of Hegelian dialectic can be found in Proudhon's handling and preoccupation with contradictions . In fact, Proudhon only knew Hegelian terms from discussions with German socialists, as he could not read German. Against Proudhon's development of the theory of labor value , Marx asserted the original version of the English economists Adam Smith and David Ricardo , which Proudhon himself described as unscientific and based on illusions, since the value of goods and labor are not calculable quantities but can be freely determined. Marx then mainly criticizes that Proudhon's analysis does not start from a historically developed system of division of labor and commodity production, but constructs reality pseudo-dialectically according to the categories as they are found in his head.

In fact, theoretical stringency is not so much Proudhon's business (in contrast, for example, to Marx, who was trained by Hegel and Ricardo), but rather discursive eloquence and openness to all phenomena of social reality as presented to him on the basis of his own life experience and political practice to have.

Marx wrote a brochure on Proudhon's Idée générale , which was offered to several publishers without success and the manuscript of which was then lost. Parts of it can be deduced from the correspondence and from the manuscript The Complete Money .

In Proudhon's work, anti-Semitic resentments become evident in several places , some of which are rooted in traditional religious anti-Judaism , and in some cases in his socialist convictions. On the one hand, he considers it to be the merit of the Church Fathers that they separated Christianity from Judaism and thus prevented its spiritual and material world domination ; He also accuses them of being responsible for the crucifixion of Christ by murdering God . On the other hand, he sees in them, anticipating modern racial anti-Semitism, an inferior human race that is incapable of economic productivity, of metaphysical conceptual formation and of its own statehood. Jews are necessarily always parasites , an "enemy of the human kind". So there were only two options left:

“You have to send this race to Asia or destroy it. By iron or by fire or by expulsion it is necessary for the Jew to disappear. "

The US historian J. Salwyn Schapiro described Proudhon in an article in 1945 as a “harbinger of fascism ”. His anti-Semitism sees the Jews as the most important source of the nation's misfortune. His racism is also expressed in the description of black people as an inferior race. His glorification of war is an integral part of his social philosophy. Following Schapiro, the historian Frédéric Krier analyzes Proudhon as a “guide to the Third Reich ”. In it he refers to Proudhon's anti-Semitism, to his “fight against ' interest slavery ' and, with reservations, also (to) the demand for bound property” in the interests of the national community as well as to his “middle class socialism”.

His image of the woman

Proudhon represented the model of the nuclear family and ascribed the traditional role of caregiver to women , since he did not see them as being like men. He wrote to an anarchist friend:

“No, Madame, you know nothing of your gender; You don't know the first word of why you and your honorable sisters are acting with so much noise and so little success. And if you don't understand it, this question, if there are forty fallacies in the eight pages of reply you made to my letter, that proves exactly what I said about your sex defects. I understand by this word, the accuracy of which may not be impeccable, the quality of your understanding, which only allows you to grasp the account of things as much as men do with the little finger. In your brain, as in your stomach, there are some organs incapable of themselves by birth, which only the male mind can make to function, to conquer their native indolence, and that the male mind is only able to make it function, although himself he is not even always successful. "

On August 13, 14 and 15, 1910, a bronze statue of Pierre-Joseph Proudhon was inaugurated in Besançon , made by the sculptor Georges Laethier , who also came from Besançon. The decision to erect the statue in his hometown was made a year before his hundredth birthday and was carried out through a competition. The statue, like many others, was destroyed by the Nazis during the occupation of France and later replaced.