David Ricardo (born April 18, 1772 in London , † September 11, 1823 in Gatcombe Park ) was a British economist and a leading exponent of classical economics . 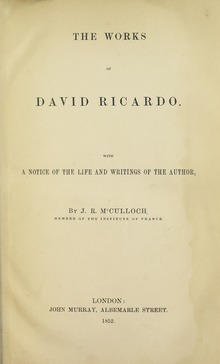 David Ricardo was born on April 18, 1772, the third of 17 children into a Sephardic Jewish family. She originally came from Portugal and had only recently immigrated to London from the Netherlands . Ricardo's father worked as a stockbroker and was considered one of the richest men of his time. He introduced his son to his profession at the age of 14, took him to the London Stock Exchange and made him work there. A few years later, at the age of 21, Ricardo met Priscilla Anne Wilkinson, who was a Quaker . He married her a short time later and renounced the Jewish Orthodox faith. Ricardo's father disinherited his son and broke off all contacts. Ricardo received a loan from friends and soon opened his own brokerage office. His success made him rich just a few years later, which soon allowed him to retire from business life. Intellectually, Ricardo was influenced by Jeremy Bentham , among others , who is considered the founder of classical utilitarianism .

In addition to his business, Ricardo dealt with mathematics and science . After reading the work The Wealth of Nations by Adam Smith (1723-1790) he dealt intensively with the economy from 1799 . At first he only made studies; In 1809 he published critical newspaper articles for the first time. However, he was only concerned with his studies from 1814 onwards. In the years that followed, Ricardo was in close contact with other leading economists of his time, such as James Mill (1773–1836) and Thomas Robert Malthus (1766–1834), with whom he was friends, even if they had different professional views. In part as a result of these dialogues, especially with Mill, Ricardo's main works, Essay on the Influence of a low Price of Corn on the Profits of Stock (1815) and On the Principles of Political Economy and Taxation (1817), emerged. From 1819 Ricardo represented the Irish district of Portarlington in the British House of Commons . There he campaigned for free trade and the abolition of grain tariffs . Finally, Ricardo died on September 11, 1823 in Gatcombe Park of complications from an otitis media .

According to his contemporaries, Ricardo was “a friendly, never opinionated, considered and somewhat reserved person”.

David Ricardo was the father of eight children, including three sons. His sons Oswald Ricardo (MP for Worcester ) and David Ricardo the Younger (MP for Stroud ) became members of parliament. The third, Mortimer Ricardo, served as an officer in the Life Guards and was Deputy Lieutenant for Oxfordshire.

David Ricardo published Principles of Political Economy and Taxation in 1817 . He developed the theory of comparative cost advantages , a core part of foreign trade theory , and thus established the Ricardian foreign trade model . According to Ricardo, foreign trade is worthwhile for all economies, even for those that have cost disadvantages for all goods compared to other countries . Because every country achieves the greatest possible profit from goods if it manufactures the products with the lower labor costs itself and purchases the other goods in exchange, whereby the relative cost advantages alone guarantee the international division of labor and their further specialization. The basis of his foreign trade model ( Ricardo model ) was the immobility of capital, which means that e.g. B. The basic and mineral resources of one country cannot be acquired by another country. Ricardo said that only 25 people in England were able to understand his Principles of Political Economy and Taxation at all. But the first edition of 750 copies was soon sold out, the second appeared in 1819, and the heavily revised third in 1821.

Ricardo's other important writings are the essay on the influence of a low grain price on capital profit (1815), in which he recommended the free import of grain, and the 1820 essay on the Funding System , in which he called for tax increases instead of loans. Together with Robert Torrens, Ricardo was able to prevail with the thesis that the base money must be limited. The opposite thesis of John Fullarton and Thomas Tookes , according to which an economy's need for money would regulate itself all by itself, was thus disproved.

Ricardo's name is closely linked to the theory of the basic rent . The emergence of the rent is attributed to the fact that, of the various existing soil qualities, the better ones are insufficient to meet the demand, and therefore the price of the soil products must be so high that the costs of building the worst still indispensable piece of land are just covered.

Although Ricardo otherwise accepts Say's theorem as valid in his economic analysis , in his last chapter on mechanical engineering he conceded that technical progress can lead to a reduction in employment; this attitude (although inconsistent in overall theory) was valued by Marx as "scientifically objective". With his own version of the labor theory of value , Marx tied in with Ricardo's work as the latest state of science known to him.

Ricardo's "grain model" is considered an early example of a one-good parabola .

The so-called Ricardian equivalence is named after Ricardo .

With the term Ricardian Vice (Eng. "A typical Ricardo mistake") Joseph A. Schumpeter sharply criticized Ricardo's method: Ricardo often makes unrealistic assumptions . In addition, he treats variables as constants which, according to the economic argument, should not be constants. Heinz D. Kurz, on the other hand, rejects Schumpeter's criticism as unjustified, since it misinterprets Ricardo's method.

The term “ Neoricardian School ” is used to describe economists such as Joan Robinson or Piero Sraffa , who have taken up Ricardo's theory and developed it into an alternative to neoclassical theory. Sraffa has also emerged as the editor of the new edition of Ricardo's collected works. Ricardo wrote an essay shortly before his death: "Absolute value and exchange value". The article only became known shortly before the publication of the Collected Works and on the occasion of a major revision of the almost complete Ricardo Complete Edition.

In honor of Ricardo, the chair of political economy at London University later bore his name.