The family of Nimravidae is an extinct line of feline predators. They originated in the Eocene about 50 million years ago. Originally they were believed to be the ancestors of cats (Felidae), but today they are considered their sister group. Accordingly, they developed their feline characteristics through convergent evolution . Because some species of the Nimravids had powerful saber teeth, which are reminiscent of those of the saber-toothed cats ( Machairodontinae ), but the Nimravidae form a family of their own, they are also known as pseudo- saber-toothed cats . The Barbourofelidae were originally considered a subfamily of the Nimravids, but are now considered a separate family.

Known genera of the Nimravidae: 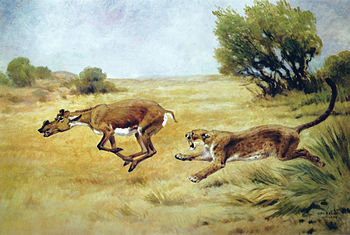 Drawing reconstruction of the genera Dinictis and Protoceras by Charles R. Knight