This article on Roman mythology is missing the following important information:

Delete the list item in question when it's done. For explanations of the individual points, see here .

Help Wikipedia by researching and pasting it . 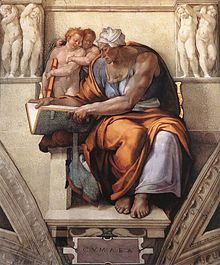 Cumean Sibyl in the Sistine Chapel

The Sibyl of Cumae or Cumean Sibyl is one of the ten sibyls named by Varro . According to tradition , she was a priestess from Babylon who lived in the 6th century BC. BC presided over the oracle of Cumae near Naples .

For the time around 520 BC. The following is reported:

The priestess owned nine books of prophecies , the so-called Sibylline Books , which she offered to the Roman king Tarquinius Superbus for sale. When the king refused because of the exorbitant price demanded , she burned three of the books and offered the rest again at the same price. Tarquinius refused again, she burned three more books and repeated her offer. Now Tarquinius gave in, bought the last three books at full price and then placed them in a vault of the Temple of Jupiter on the Capitol . The story is mentioned in Varro's lost books, from which Lactantius quote in the Institutiones Divinae (I: 6) and Origenes .

Among other things, the Sibyl of Cumae is mentioned in the works of Virgil ( Eclogues and Aeneid ) and Petrons ( Satyricon ), in Maurus Servius Honoratius as Deiphobe ; in post-antique literature it appears, for example, in Christine de Pizan's Livre du Chemin de long estude .

In his Metamorphoses Ovid also passed on a myth of metamorphosis about the Sibyl of Cumae. When Aeneas once visited her in her cave, she told him that she refused the god Apollo, but that he had given her a wish. She wished for as many years of life as there were grains of dust in a heap of sand, but forgot to wish for youthfulness to go along with it. But the god had expected that; for he offered her to take care of it if she was his will. But she refused again, was getting older and older and complained, marked by age, that she had already been living seven hundred years, had three hundred left to go and, having become unrecognizable to all, would only be present as a voice.

Trimalchio alludes to this story in Petron's novel Satyricon . He tells that in his youth in Cumae he saw boys who asked Sibylla, who was hanging in a glass bottle: "Σίβυλλα, τί θέλεις;" (Greek, "Sibylle, what do you want?") - as Apollo had asked at the time - , and she replied, “ἀποθανεῖν θέλω” (“I want to die”).

In art, the Sibyl of Cumae appears on the ceiling painting of the Sistine Chapel by Michelangelo , in the choir stalls of the Ulm Minster , in the Capella Nuova in the Orvieto Cathedral , on the Ghent Altarpiece and in a mosaic of the Siena Cathedral with the note that Piso had mentioned them in his annals. The attached Latin text reads:

"He will end the fate of death, he will sleep for three days, then he will return from the dead and come to the light and thus indicate the beginning of the resurrection."