Codex Forster III in the original binding with a wooden handle as a clasp. 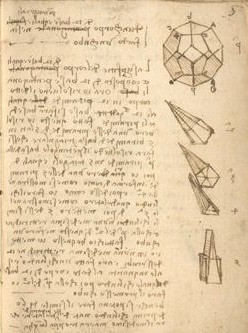 Folio 7r from Codex Forster I with studies on Euclidean geometry. 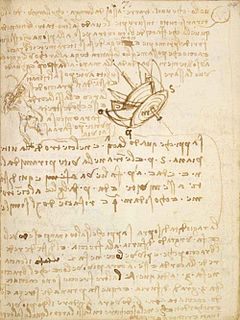 Folio 44r from Codex Forster I with studies on mechanics.

The Codex Forster is a bound collection of sheets with notes, sketches and drawings by the Italian Renaissance artist , architect, anatomist, mechanic, engineer and natural philosopher Leonardo da Vinci (1452–1519).

The name Codex Forster was given to the manuscript by the English writer and biographer John Forster (1812–1876), who bequeathed the work to the Victoria and Albert Museum in 1876 .

The codex consists of five manuscripts in three volumes ( Forster I to III ) with a total of 354 pages. It is dated to about the period 1493 to 1505. Leonardo wrote the text in his characteristic mirror writing and provided it with numerous drawings and sketches.

Forster I
The Codex Forster I consists of two manuscripts with a total of 101 sheets in the format of about 10 cm × 14.5 cm. The content of the first manuscript, dated around 1487 to 1490, contains studies on Euclidean geometry and stereometry , which Leonardo da Vinci probably made under the guidance of the mathematician Luca Pacioli (around 1445-1514 or 1517). It is one of the few manuscripts from Leonardo that is strictly structured. The second manuscript, dated around 1505, mainly contains studies on hydraulics , such as the Archimedean screw , as well as a number of chemical formulas. The chemical work may go back to Leonardo's friend and colleague, the metallurgist and alchemist Tommaso Masini .

Forster II
The Codex Forster II contains two manuscripts with a total of 159 sheets in the format of approximately 7 cm × 9.5 cm. The first manuscript, dated around 1497, shows treatises on mechanics , studies of decorative knots and braids, and sketches on architecture . The second, dated around 1497, contains records of Leonardo's research on physics and mechanics such as force , mass, and motion .

Forster III
The Codex Forster III consists of 94 sheets of approximately 6 cm × 9 cm. It has the character of a notebook for spontaneous, everyday notes and sketches. Leonardo used his sketches and drafts, but also ideas and thoughts, to record in bound sketchbooks and notebooks. It is reported that he always wore such a book on his belt. The work shows the remarkable diversity of Leonardo's interests and contains, among other things, drafts of fables and parables , studies for the equestrian monument of Francesco Sforza as well as maps and city plans.

Most of Leonardo da Vinci's manuscripts and drawings were kept in his villa near Vaprio d'Adda by his pupil and heir Francesco Melzi (around 1491/92 - around 1570) after his death . His son Orazio Melzi inherited the documents in 1570. The Codex Forster, like other manuscripts by Leonardo da Vinci, was given by Orazio Melzi to the sculptor Pompeo Leoni (1533–1608), who sold them to Count Galeazzo Arconati.

In 1637 the work was donated to the Biblioteca Ambrosiana in Milan. The Codex appears for the last time in the records of the Ambrosiana Library in a list of the Arconati donation from 1674.

It disappeared from the Biblioteca Ambrosiana around 1700. In 1873 the manuscripts came into the possession of the English writer John Forster, from whose estate they were given to the Victoria and Albert Museum in London in 1876.