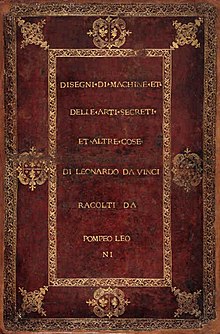 Pompeo Leoni was born around 1530 as the son of the sculptor, medalist and goldsmith Leone Leoni (1509–1590), court sculptor of Emperor Charles V (1500–1558). Pompeo learned the art of the sculptor and medalist from his father, who had a workshop in Milan. The building, the so-called "House of Omenoni" (Italian: " Casa degli Omenoni ") in Via degli Omenoni still exists today.

Around 1556 Pompeo followed his father to the Spanish court in Madrid and then spent most of his life in Spain. Although he was sentenced to one year imprisonment by a tribunal of the Inquisition for " Lutheran " speeches in 1558 , he was then appointed court sculptor Philip II (1527–1598) and from 1563 was listed as a citizen of Madrid. Together with his father, Leoni worked on the interior design of the El Escorial palace and created a large part of his life's work in Madrid. So the statues of Charles V and Philip II in the Basilica of the Escorial and the grave sculpture of the Infanta Johanna in the monastery of Descalzas Reales in Madrid . Between 1576 and 1578 he was probably portrayed by El Greco , a painting attributed to the Greek and said to show Leoni was auctioned off to a private collector at Rosenberg & Striebel in New York.

The manuscripts of Leonardo da Vinci

Around 1590 Pompeo Leoni was able to acquire a large part of Leonardo da Vinci's manuscripts , including over 2500 individual sheets. He tried to organize the writings thematically, cut up individual sheets and glued together others that did not originally belong together. He summarized up to six drawings on one page. A work created in this way, later called Codex Atlanticus , in the form created by Leoni, had a circumference of 481 sheets in the format 43.5 cm × 64.5 cm and approx. 60 cm thick. Today the work, which has since been restored and rearranged, is in the holdings of the Biblioteca Ambrosiana in Milan.

Leoni summarized Leonardo da Vinci's anatomical drawings in several volumes, which were later named Codex Windsor together with other thematically differently oriented manuscripts . Since the end of the 17th century, the now individually cataloged, anatomical drawings by da Vinci have been in the collection of the Royal Collection in Windsor Castle .