Anne Gesthuysen [ ˈɡesthyːzɜn ] (born October 2, 1969 in Geldern ) is a German journalist , writer and television presenter . She moderated the ARD morning magazine from 2002 to 2014 .

Gesthuysen grew up in the municipality of Alpen on the Lower Rhine . After completing high school at the Stiftsgymnasium Xanten , she began studying journalism at the University of Dortmund . She gained her first journalistic experience at the age of 17 as a radio reporter for the WDR outdoor studio in Kleve during a student internship . In 1990 and 1991 she completed her traineeship at WDR in Cologne . As a freelance writer, she subsequently worked for the broadcasters WDR, VOX and ZDF .

After completing his studies, Gesthuysen first went to the WDR studio in Münster . Between 1997 and 1999 she stood in front of the camera for the first time as a presenter for WDR television. This was followed by a detour to the private television station RTL . There she and other moderators presented the program Mein Morgen , a breakfast television derivative that was discontinued after almost six months. After returning to WDR, she initially worked as a presenter for the local time in Essen . 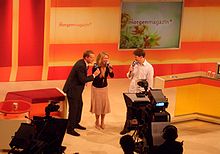 From 2001 to 2004 Gesthuysen hosted the news program Current Hour of the WDR alongside Martin von Mauschwitz . From 2002 to 2014 she moderated the ARD morning magazine produced by WDR - initially on a temporary basis and from March 2004 together with Sven Lorig as a regular presenter. According to the company, the main driving forces behind the move were the appeal to international political issues and the free moderation. In 2012 she won the German television award with the team from ARD-Morgenmagazin . In 2005 she took part in the ARD Star Tour alongside Dariusz Michalczewski , Roberto Blanco , Ralf Möller , Jeanette Biedermann and Sven Hannawald and other celebrities .

In 2006 Gesthuysen had a guest role in the ARD series Verbotene Liebe , in which she played herself. In February and March 2007 she represented a European-relevant topic (health, Turkey, climate, smoking) as a lawyer in the four-part WDR live broadcast Streitfall . Lorig took the opposite position. In May 2009 she and Lorig presented the ARD gala Every hour counts , the opening show for the ARD theme week is a matter of honor . From January to December 2010 she hosted the ARD morning magazine as well as the Phoenix round on the Phoenix event channel .

In 2012 Gesthuysen published the novel We Are Sisters , inspired by the lives of her three great aunts, who were all 80 years old and older. The book was a huge success and temporarily took first place on the Spiegel bestseller list. She sees her third novel, Girls' Evening (2018), as an homage to her late mother-in-law.

In December 2014, Gesthuysen announced that at the end of the year he would give up moderation of the ARD morning magazine in order to be able to write more novels.

From 2016 to 2017, Gesthuysen and her husband Frank Plasberg competed in the quiz show Paarduell , moderated by Jörg Pilawa , which was broadcast on the first weekdays, against a different, sometimes prominent couple .

Gesthuysen and Plasberg became parents of a son in January 2011. Her favorite place on the Lower Rhine is her parents' house in Alpen- Veen , where her brother Michael now lives.