Entrance to the Metro-Net station in the Leipzig Exhibition Center . 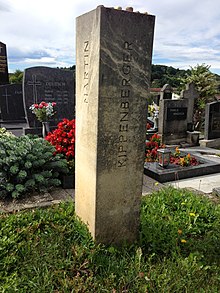 Martin Kippenberger grew up in Essen with two older and two younger sisters, including the journalist Susanne Kippenberger . The father was the director of a colliery, the mother a dermatologist. Kippenberger was a great-great-grandson of Carl Leverkus (1804-1889), who gave the city of Leverkusen, founded in 1930, its name. In 1968 he dropped out of school and began an apprenticeship as a decorator, which he was not allowed to finish due to drug use. 1972 to 1976 he studied at the University of Fine Arts in Hamburg (with Claus Böhmler , Rudolf Hausner and Franz Erhard Walther ). Then he moved to Florence, where he began with the series of pictures “Uno di voi, un tedesco in Firenze”. In 1977 he made the acquaintance of Werner Büttner , Albert and Markus Oehlen . In 1978 the company moved to Berlin. Together with Gisela Capitain , Kippenberger founded “Kippenbergers Büro” in Berlin in 1978, where he showed exhibitions by young artists. At the same time he became managing director of the event hall SO36 - at that time primarily a meeting place for the punk scene. In 1979 the well-known 12-part group of works "Dear painter, paint me" was created, which a poster painter painted based on Kippenberger's photo templates.

In 1980 he moved to Paris to become a writer. In 1981 he took part in the group exhibition Rundschau Deutschland . In 1984 he was "Look depth - Art of the eighties of the Federal Republic of Germany, East Germany, Austria and Switzerland" with six plants in the exhibition in the Hessian State Museum in Darmstadt and at the show from here - two months of new German art in Dusseldorf represented . In the same year he joined the Lord Jim Lodge (the founders, in addition to Kippenberger, were Jörg Schlick , Albert Oehlen , Wolfgang Bauer ; their motto: “Nobody helps nobody”). In 1987 the first drawings were made on hotel stationery. In 1988 he took part in the Venice Biennale . In 1989 his daughter Helena Augusta Eleonore was born. In the same year he moved to Los Angeles .

In 1990, Kippenberger took on a visiting professorship at the Städelschule in Frankfurt and from 1992 gave guest lectures at Yale University and at the Universities of Nice , Amsterdam and at the Kassel University of Applied Sciences . In 1992 he took part in the Documenta IX in Kassel. In 1996 he received the Käthe Kollwitz Prize . In 1997 he took part in Documenta X in Kassel and in the exhibition Skulptur.Projekte in Münster . In 2003 he was represented posthumously at the 50th Venice Biennale together with Candida Höfer for the German pavilion.

Kippenberger's works can be assigned to the Neue Wilde . In the tradition of Dada and Fluxus , he worked on the dismantling of the traditional concept of art. His means of doing this included provocation, cynicism and ridicule.

In 1986 the Hessisches Landesmuseum Darmstadt presented its first solo exhibition with “Rent - Electricity - Gas”. On February 8, 2006, Tate Modern opened the first comprehensive retrospective of Martin Kippenberger's work in Great Britain. A selection of Kippenberger's productive work could be viewed in the London Museum until May 14, including self-portraits from 1988 or numerous drawings from the hotel stationery series. The exhibition then moved to K21 , Düsseldorf.

His work “ First the Feet ”, created in 1990 - a grass-green frog nailed to the cross with a beer mug and egg in his hands - attracted attention in 2008. Pope Benedict XVI supported the President of the South Tyrolean Regional Council, Franz Pahl , with a letter that the crucified frog offends the religious feelings of many people. Pahl went on a hunger strike to have the work of art removed from the Museum of Modern Art in Bolzano. Despite the hunger strike, vigils and letters to the editor, the director of the museum and the board of directors confirmed their decision to leave the sculpture in the museum until the end of the regular exhibition.

In 1996, Kippenberger and the photographer Elfie Semotan married .

Martin Kippenberger died on March 7, 1997 in Vienna of complications from liver cancer.

In honor of Kippenberger, Ben Becker wrote the song "Kippi or Kippy-Song". 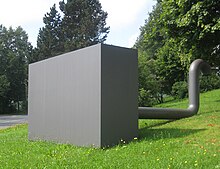 "With the best will in the world, I can't see a swastika"

The work I can't discover a swastika with the best will in the world, from 1984, addresses the specifically German identity problem: Kippenberger subversively wants to question and satirize the morals of Germans and their relationship to their Nazi past.

The sculpture First the Feet , a crucified frog, created in 1990, is a self-deprecating self-portrait. 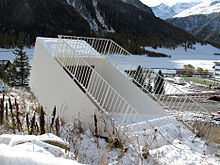 With Metro-Net , Kippenberger planned a global subway system, consisting only of mock entrances and ventilation shafts, in which occasional driving noises and air flows generated by fans reinforced the fiction. As the first station of Kippenberger's Metro-Net , a concrete staircase was built in 1993 on the Greek Cycladic island of Syros . The lower entrance, however, was blocked by a wrought-iron door bearing the signet of Lord Jim Lodge . A subway exit made of wood was added in August 1995 in Dawson and another exit in 1997 on the grounds of the Leipziger Messe . Several planned stations were set up posthumously, for example during the Documenta X in Kassel in 1997 and the Skulptur.Projekte in Münster. A transportable ventilation shaft (1997) is in the Grässlin Collection and was exhibited in St. Georgen and Karlsruhe, for example, and a transportable underground entrance (1997) was on display in the Cologne Sculpture Park from 1997 to 1999 . In 2003, a further ventilation shaft was installed in the German Pavilion at the Venice Biennale, which - six years after the artist's death - was sometimes discussed as not being true to the original. As early as 2001, an installation Transportable Underground Entrance, which was completed in 1997 while Kippenberger was still alive, was built in the village of Madulain in Switzerland. The logo of the Lord Jim Lodge, "Sun Breasts Hammer", can be seen on the gate.

Kippenberger's paintings, installations and sculptures are in numerous public collections. In the German-speaking area, these are

A process in the Ostwall Museum made headlines in November 2011 when a cleaning lady scrubbed Kippenberger 's work of art, insured with 800,000 euros, when it starts dripping through the ceiling, and thus irretrievably destroyed it.

The director Angela Richter staged in 2013 at the Cologne Theater , the piece Kippenberger! An excess of the moment .