Dawson City or Dawson is on the right bank of the Yukon , at the mouth of the Klondike River , 150 miles south of the Arctic Circle . 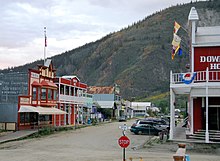 The settlement was founded in 1896 at the start of the legendary Klondike gold rush and named after the Canadian geologist George Mercer Dawson , who explored the region.

Dawson could only be reached via the White Pass or the infamous Chilkoot Trail and then via a long and arduous route by dog sled or canoe , later by paddle steamer on the Yukon. In 1898 the population had reached its peak with over 40,000 people. Belinda Mulrooney, an entrepreneur, was one of the most influential people in town at the time . It was the largest city west of Winnipeg and north of Seattle . A year later only 8,000 people lived there, in 1902 only 5,000.

The climate in Dawson is subarctic ( Dfc according to the Köppen and Geiger climate classification ). The average temperature in July is 15.6 ° C and in January -26.7 ° C. The highest temperature ever recorded was 34.7 ° C on May 31, 1983, while the lowest temperature was recorded on February 11, 1979 at −55.8 ° C. Temperatures below −30 ° C are very common in the winter months. The harsh and very cold winters in particular bothered the gold diggers of the founding period. All data from 2000. 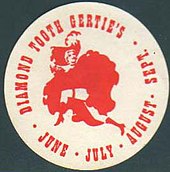 Numerous houses in the gold rush town have been restored and incorporated into a historic district, in which precise building and maintenance regulations apply. New buildings also have to be built here in the historical style.

The Dawson City Museum presents the history of the first gold mines and portrays the history of Dawson's homes. You can also see an exhibition about the railway at the turn of the century and a directory of prospectors. The fire department museum is located at the north end of the city and exhibits historic fire engines and equipment.

Since Dawson's gold rush found its way into world literature through writers like Jack London , the city is offering a Writers' Retreat in the childhood home of the writer Pierre Berton , which allows writers to live and work in the city for a while. The log cabin of the writer Robert William Service has been preserved, which was brought here by Jack London from Stewart Island.

In order to offer visitors the most realistic experience possible, the Free Claim # 6 was expanded as a free adventure claim on the historic Bonanza Creek. According to tradition, there is still a casino , the Diamond Tooth Gertie’s . Finally, the paddle steamer SS Keno can also be visited.

In February, the Yukon Quest , an annual dog sled race between Whitehorse and Fairbanks , stops in Dawson. It is the only place where provisions can be taken during the ten to fourteen day race.

Dawson has hotels like the Downtown Hotel and the Aurora that are open year round. About 5 minutes before Dawson, the Bonanza Gold Motel & RV Park is also available for guests all year round. Today Dawson is the destination of many canoeists who start in Whitehorse and paddle their Canadians to Dawson in 14 to 16 days . In the Hanover Zoo, some of the Dawsonian buildings have been faithfully recreated in the Yukon Bay theme park .

The Dempster Highway begins about 25 miles east of Dawson and crosses the Arctic Circle to Inuvik in the Northwest Territories. Tuktoyaktuk , located further north on the Arctic Ocean, can only be reached in winter via the Ice Road , which is laid out on the frozen Mackenzie River every December with great effort. The river will then become an important transport link for the Inuit . Because only now can larger goods transports be carried out without the aid of airplanes. However, this traffic artery is at risk due to global warming. The temperatures in 2007 were so high that the Ice Road was only passable in January - and then only with a certain risk.