In the old church 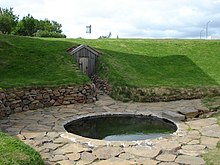 Excavations in the churchyard, Reykholt, 2006

The Reykholtsdalur. The Deildartunguhver steams in the middle distance. 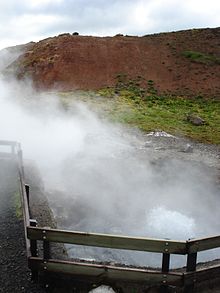 Reykholt is a place in the Icelandic municipality of Borgarbyggð in Reykholtsdalur and 108 kilometers by road from the Icelandic capital Reykjavík .

As in many Icelandic names, the name of the place contains the word reykur ("smoke"). This is explained by the presence of a large number of hot springs in this valley.

This is a so-called low - temperature area . The heat that can be measured in the ground cannot be assigned to any of the active volcanic systems in the area. It rises through crevices in the ground as it does in several places on the Snæfellsnes peninsula . But, as far as is known, there is no magma chamber under the springs.

The springs with the greatest abundance of water are Deildartunguhver and the Kleppjárnsreykir spring , but the most unusual is located in the middle of the Reykjadalsá river and is therefore called Árhver ( isl. Á = "river").

Deildartunguhver , the most important low-temperature spring area in the country, is on the way from Reykholt to Borgarnes . The many small and large springs at the foot of the hill have an output of 200 l per second at 100 degrees hot water. 64 and 35 km long pipelines lead the water to Akranes and Borgarnes. The springs are now developing again into spring springs , small geysers . One of them succeeds in producing columns of water around three meters high.

Another notable source is Skrifla , which is located in Reykholt itself. It is said that Snorri Sturluson tamed her water and added it to the still visible hot bath.

From 1908, the farmer Erlendur Gunnarsson on the Sturlureykir farm used the water from the spring there to heat the houses, an innovation in modern Iceland. However, during excavations in Skálholt and Reykholt itself, remains of pipes have been found, which probably belong to medieval underfloor heating systems. The knowledge about it might have been lost - similar to the case of the corresponding technology of the Romans in Germany.

Not far from Reykholt in Hvítárdalur near Húsafell are the Hraunfossar lava waterfalls , one of the most important natural wonders of the island, and the Barnafoss waterfall . From there you can also go on excursions to the caves of Hallmundarhraun , v. a. to the surtshellir .

The caves are located in the Arnarvatnsheiði , which is famous for its many fish-rich lakes.

Reykholt has been trying to reforest since 1948. Small woods with walking paths surround the place. On Eggertsflöt is the site of the wedding of the Enlightenment Eggert Ólafsson , who soon died tragically with his wife. There is also one of the turn- of-the- century forests: in 2000, 281,000 trees were planted across Iceland, the number corresponding to the then population of the country.

Place of poets and thinkers

This place is closely connected with the name of Goden Snorri Sturluson (1179-1241), who was one of the greatest poets and most important politicians in medieval Iceland . He spent much of his life i.e. H. from 1206 to 1241, in Reykholt and died there too. He had had a fortification built around his house, but in the end it turned out to be useless. He was murdered there anyway.

Snorri wrote his most important works in this place; H. the story of the Norwegian kings ( Heimskringla ), the prose Edda , the famous book on poetics and Nordic mythology, and probably also the saga of Egill Skallagrímsson .

Remnants of his courtyard and above all a bath with an underground passage can be seen there. In the Snorrastofa there is a very interesting museum about Snorri and his time (explanatory boards in Icelandic and English, some German translations). The library is mainly used for medieval research and can contain some interesting documents.

The oldest is in the neighboring state document collection, Reykholtsmaldagi , a church book from the late 12th and early 13th centuries. It is believed that one of the entries in it came from Snorri.

In front of the local government document collection is a statue of Snorri, which the famous Norwegian sculptor Gustav Vigeland presented to the Icelandic state.

He is a well-known poet in Iceland and was director of the literary collection of the Árni Magnússon Foundation from 1927 to 1971 .

Parts of the Reykjadalsá river and the Rauðsgil gorge next to the farm of the same name are now under nature protection.

"Norwegian author kills the parish priest of Reykholt" was the sensational headline in the newspaper Fréttablaðið .

The Norwegian author Tom Egeland came to Reykholt in preparation for his crime novel Paktens voktere (2007, Eng . Der Pakt der Wächter , Goldmann, 2008). There the very well-read parish priest Séra Geir showed him around and showed him the sights. Later it turned out that the pastor murdered in the novel has striking physical similarities with Séra Geir.

Even today, although the school has now been closed, the culture is cultivated with readings and lectures. This is mainly based on the " Snorrastofa " mentioned above , a center for the development of medieval, v. a. Icelandic literature, with exhibition and seminar rooms as well as a corresponding specialist library.

Reykholt has been a parish seat since the Middle Ages. The older wooden church still preserved dates from 1886–1887, the new church was consecrated in 1996.

In July, on the weekend before the so-called Verslunarmannahelgi, there is a festival for classical music called " Reykholtshátíð " in the new church .