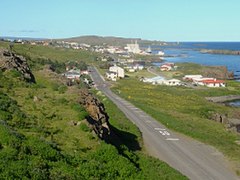 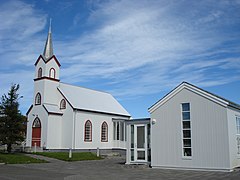 Church of the village of Vopnafjörður

The place Vopnafjörður ("Waffenfjord") with 527 inhabitants is located on the fjord of the same name .

After Reykjavik , there are 622 and for Egilsstaðir 173 km. There are two road connections, on the one hand via Hellisheiði eystri or on the other hand through the valleys Vesturárdalur and Hofsárdalur. The latter in connection with the Hringvegur is open all year round, the other via the Hellisheiði eystri is temporarily closed in winter.

The municipality has the Vopnafjörður airport , which also offered regular connections to Akureyri and Þórshöfn.

The merchants of the Hanseatic League stopped here in the Middle Ages. After the introduction of the trade monopoly by the Danes in the 16th century, they had a trading post here. From 1787 independent merchants settled here, who supplied the farmers in the area or bought their products. It was not until the end of the 19th century that a fishing village was formed in Vopnafjörður. The port was expanded again in 1968 and is the most important fishing port in the northeast of Iceland.

The parish church dates from 1902 and has, among other things, an altarpiece by Jóhannes Sveinsson Kjarval .

North of Vopnafjörður in Selárdalur there is an outdoor swimming pool that is supplied from a thermal area. To the south, also on Norðausturvegur , road 85, is the Bustarfell peat farm .

The Hofsá í Vopnafirði River is a famous salmon river.

Like most areas of Iceland now, except for the southwest around the capital Reykjavík, Vopnafjörður is suffering from severe population loss. From 1997 to 2006 the population decreased by 16%.

Municipalities in the Austurland region