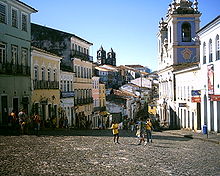 The Largo de Pelourinho: the cultural and tourist center of the city

Pelourinho is part of the Cidade Alta ("Upper Town") of Salvador da Bahia , the first capital of Brazil . It belongs since 1985 to the World Heritage of UNESCO . 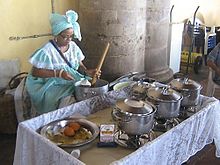 Street kitchen on the Pelourinho

Pelourinho is located above the old town around the Largo do Pelourinho , also known under the name Praça José de Alencar . Once a thoroughfare from the Jesuit monastery to the Carmel (Convento do Carmo), a pillory (Pelourinho) was erected there, as in many other parts of the city, where slaves were primarily flogged and displayed. The Portuguese name pelourinho testifies to this former place of jurisdiction and the penal system. In Vila do Conde, for example, a stone column on the square in front of the parish church is also called Pelourinho and was considered a stake in historical times. However, other city residents, for example because of homosexual offenses or theft, could also be tied up there for a certain period of time. On the Pelourinho you can visit the Igreja do Rosário dos Pretos (Church of the Black Rosary). In Salvador , the Pelourinho was also a slave market until 1835 .

In 1988 the Pelourinho was still in ruins

For a long time, however, the Pelourinho fell into disrepair and degenerated into an inner-city favela . People lived there in the most unworthy of conditions. Since 1990, with the support of UNESCO, the district has been revitalized by means of systematic restoration. The favela residents were relocated to new housing estates outside Salvador in 1991 and the Pelourinho and its surrounding streets were completely renovated. Its reconstruction could not be carried out in detail because many houses had fallen into ruins, of which only the facade could be saved. Boarding houses, restaurants and dance and capoeira schools found their way into the city. Today the restored Pelourinho with its many narrow and cobbled streets, lined with brightly colored, pastel-colored rows of houses, churches, monasteries, cafes, bars, restaurants and cabaret markets, is one of the main tourist attractions of Salvador. Many artists live here such as filmmakers, musicians, painters and writers. Since then, many domestic and foreign tourists have been drawn to Salvador. 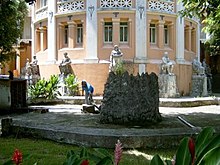 Reconstructed pavilion of the Medical Faculty of Bahia

One of the most famous buildings of the Pelourinho, which has been badly affected, is the Medical Faculty of Bahia (Faculdade de medicina da Bahia). The founding date of this building goes back to the colonial times of Brazil. The Jesuits lived here until they had to leave Brazil in the 18th century. After a military hospital stood there, the surgical school was established in 1808. The faculty was largely destroyed twice by a major fire. The first time in 1905 when the library with its 22,000 volumes burned down completely, and the second time when the pavilion burned down in 1951. The latter was left to decay for many years until it was also rebuilt as part of the overall reconstruction of the Pelourinho.

The Pelourinho has been home to the street children project Projeto Axé for several years . Up to 1,500 children are looked after there from kindergarten to vocational training. In addition to education and school, many children receive a warm meal there. Children and young people who are committed to music particularly enjoy playing in one of the percussion bands or capoeira groups that are part of the project . But many Sambareggae groups such as Olodum or Ilê Aiyê are also represented here with their projects.

As in 2012, the military police struck from April 15 to 17, 2014. Numerous lootings, 70 stolen cars and 48 murders were officially recorded during this period. On the afternoon of April 17, the strikers accepted the government's wage offer.