Möhringen is a state-approved climatic health resort on the Upper Danube in Baden-Württemberg and has been a district of Tuttlingen since 1973 .

Möhringen lies at 651  m above sea level. NN between Lake Constance , the Swabian Alb and the Baar in the valley of the young Danube and is mainly surrounded by large forests. With 3029 hectares, the district of Möhringen is almost as large as that of the core city of Tuttlingen or z. B. that of the city of Offenbach , of which almost three quarters are forested.

Möhringen's core is the medieval town center. The Burg district forms a separate settlement area at an altitude of over 700 meters.

The Möhringer suburb with around 1500 inhabitants, an area built together with the core city of Tuttlingen but not with Möhringen, is also located in the district. There is part of the Tuttlingen train station, the “Tuttlingen-Gänsäcker” stop and the largest industrial area in the entire city of Tuttlingen.

Möhringen was first mentioned in 882, it has had town and market rights since 1308 , but it was not until 1470 that it received the long-awaited coat of arms of Emperor Friedrich III. According to the coat of arms, which is still present in the original, it shows a Moor . Why this portrait was chosen is unclear. In the 19th century, the Möhringers quickly turned it into a female figure, the Mohrin, who is popularly referred to as "Möhrin" based on the place name. Cast in ore, it adorns the life-size pike fountain in the center of the village, bare-breasted, clad only in a loincloth made of feathers and equipped with a bow, arrow and quiver. She wears a golden diadem on her head.

The city colors black-white-blue are not commonplace for municipalities because the tricolor (tricolor) in vexillology is mostly reserved for states.

In 1806 Möhringen, which belonged to the Fürstenberg dynasty for almost 400 years , came to the Grand Duchy of Baden . Today's town hall was once the seat of the upper bailiffs and has been referred to as the castle several times. Together with the church, it is the oldest building in the village and was built around 1280. In 1846 it went to the Leiber family, whose last offspring, Hermann Leiber, bequeathed the house to his hometown by will with the stipulation that the town hall be established there.

On January 1, 1973 Möhringen was incorporated into the district town of Tuttlingen. At the same time, the Donaueschingen district , to which Möhringen previously belonged, was dissolved. 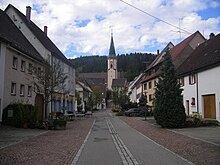 The population of Möhringen is increasing and is currently 3988 people (as of 2015).

Möhringen has maintained partnerships with the cities of Battaglia Terme in Italy, Bischofszell in Switzerland and Waidhofen an der Ybbs in Austria since 1956 . With regard to the efforts to spread the European idea Möhringen was in the 1964 European flag awarded.

Coat of arms and banner

"The banner is black-white-blue striped lengthways with the coat of arms in the middle."

The town hall is one of the oldest buildings in the Möhringen district. It was built around 1300 and in earlier years served as a castle for the seat of the governor of the town of Möhringen, which belongs to the Principality of Fürstenberg. Over the centuries it has been rebuilt several times, for example the Möhringer Zehntscheuer was once attached to the castle in the direction of today's Kreuzgasse. In the 19th century it went into private ownership and the last member of the Leiber family bequeathed it to his hometown. The last major renovation took place in 1937.

The main attraction in Möhringen is the Danube with its infiltration points. In summer and autumn, the Danube seeps away completely on most days, making the Krähenbach the first water supplier after the Danube seeps away . The water flows underground through the lime-rich Weißjura and comes to light again in the source of the Aach near Aach (Hegau) . In a geological period, today's Danube in Möhringen will completely disappear and flow over the Aach to the Rhine. The aforementioned Krähenbach will then be the origin of the Danube.

The reservoir was built in 1923/24 and was supposed to serve as a water supplier for its own hydroelectric power station (today's Protestant church). As was common at the time, a large number of communities tried to be self-sufficient in energy and started such projects. However, the gradient from the reservoir to the planned power plant was too small and the finished project had to be abandoned.

The Tuttlingen district has earned a reputation for its “stage in the Anger”. Renowned artists perform there as part of the city-wide cultural program of the Tuttlinger Hallen. Particularly noteworthy is the “Tuttlinger Krähe” cabaret, which takes place every March in the Möhringer Angerhalle.

One of the “events” in the course of the year is the “Städtlefest”, a joint event of the Möhringer clubs, which takes place on the first weekend in July in even years.

Every year, however, the Möhringer Fasnet takes place, the Baden Städtle is a stronghold of the Swabian-Alemannic Fasnet . It begins at Schmotzige Dunschtig in the morning at 5:00 a.m. with the waking up by the shirt-clinkers before school and kindergarten are freed from the fools. At noon at 2:01 p.m., the historical schematic court, which was mentioned in Zimmer's chronicle as early as 1549, meets in the town hall . This is followed by the reception for invited guests by the mayor, before the fool's tree is set at 7:00 p.m. The "old boxes" then move through the bars.

A specialty are the Scherbel groups, who on Carnival Sundays and Mondays, in their sometimes splendid fool's hat, sing and shout through the bars . There are over 20 such groups in Möhringen. The highlight of the Möhringer Fasnet is the Hanselerennen on Fasnet Tuesday. Well over 100 fools in the traditional Weissnarren-Häs jump through the streets of Möhringen with their bells ringing loudly and distribute oranges, rolls and sweets to the children who recite the previously rehearsed Hansele proverbs.

An original event runs annually from April to December when the Möhringen night watchmen do their rounds. They are not alone, but all kinds of servants and rabble can be found on the two-hour tour through the town. These include herbalists, ailing beggars, drunkards, washerwomen and even pretty women.

After the end of a 400-year brewing tradition in the 1990s, when Möhringen lost the last two breweries (the Kronen-Bräu went to the Hirsch-Bräu in the neighboring village of Wurmlingen and the Link-Bräu ended production), it has existed with the since 2010 Salvermoser brewery is at least a microbrewery again.

Today Möhringen is a modern residential and service area, but also has a large industrial area with a shopping center in the southeast. With this modern industrial area, the Gänsäcker, Möhringen contributes a good part of the economic development of the entire city of Tuttlingen. Important companies such as Rieker (shoes), Binder (refrigeration technology) and Synthes (surgery) have settled there.

A private association offers accommodation for tourism. In addition to the gastronomy, there are holiday apartments from private landlords. Also worth mentioning is the Naturfreundehaus, which offers inexpensive accommodation for larger groups, for example also for school camps. The Bruno-Hettich-Camp of the Catholic parish is a large campground for youth groups.

Möhringen has three stops on the Ringzug: Möhringen train station and the newly created Möhringen-Rathaus and Tuttlingen-Gänsäcker stops . The latter designation is not correct, however, because the breakpoint is on Möhringer district, which is why there was a scandal. However, the corrective renaming was rejected by the railway due to the costs of an estimated 15,000 euros .

Möhringen is located directly on the federal highway 311 not far from the A 81 Stuttgart - Singen , exit Geisingen (south) or Tuningen (north).

Personalities who worked on site

Localities and districts of Tuttlingen