Anton Braun , also Antonius Braun, (born October 22, 1686 in Möhringen an der Donau , † April 20, 1728 in Vienna ) was a mechanic , optician (instrument maker) and court mathematician in Vienna. He invented one of the first calculating machines ( mechanicae mathematicus ).

Little is known about his training path, but he came from a watchmaking family. Stays in Prague around 1719 and in Milan around 1720 are documented. There he worked as an instrument maker. From 1724 he then held the position of chamber optic at the court in Vienna. Three years later, as an applicant for the position of imperial instrument maker, he prevailed against a large number of competitors. But only about a year later Braun died on April 20, 1728. His wife Maria Magdalena, b. Stein from Ettlingen , whom he married in 1712, he left a small fortune, part of which went to his hometown Möhringen in his will .

In 1727 he built a calculating machine based on sprocket wheels (invented by Giovanni Poleni in Padua in 1709) and shaped like a drum. It is in the Technisches Museum Wien. It is splendidly decorated and bears a dedication to the emperor and the name of the builder Antonius Braun SCM Opticus et mathematicus on the lid and the date of completion 1727. A working replica is in the Arithmeum .

A second calculating machine from him has a completely different structure and is located in the Deutsches Museum in Munich. Only externally does it resemble the calculating machine in Vienna (round shape, crank in the middle, concentrically arranged number windows, splendid decorations), but it is smaller. It was completed by Philippe Vayringe from Lorraine in 1736 (which is why the lid says brown invenit, Vayringe fecit ), who came to the Viennese court with his husband Maria Theresa Franz von Lothringen. The original is in the Deutsches Museum, working replicas (made in the Feintechnikschule Villingen-Schwenningen) of this calculating machine are also in Munich, in the Arithmeum in Bonn and in the museum in the town hall of his hometown Möhringen , today a district of Tuttlingen . The design is similar to one that Jacob Leupold published in his book on machines. All four basic arithmetic operations were technically possible. The machine came to Munich from private ownership in Vienna in 1925. 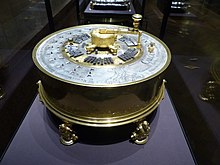 The calculating machine he constructed in 1727 is one of the first that worked well in practice even after years of use (which could not be said of other predecessors) and was used at the imperial court.

For his services at the court of Emperor Charles VI. he received a diamond-studded necklace with the portrait of the emperor - it can also be seen in the Möhringen town hall - and also 10,000 guilders, which he bequeathed to his hometown. The Braun'sche-Susan'sche Foundation exists there to this day. a. was founded with this donation. The Möhringen Hospital (now a vocational training center) was built from these funds and those in need are still supported from it. The Möhringen local council also acts as the foundation council. The chairman is the mayor.