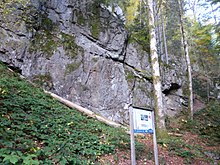 The Buchberger Leite is a gorge near Hohenau in the Lower Bavarian district of Freyung-Grafenau in Bavaria .

The gorge extends between Freyung and Ringelai .

As early as 1846, Bernhard Grueber and Adalbert Müller wrote in their book The Bavarian Forest : "Do not fail to visit the nearby Buchberg from Freyung, where the rushing waters of the Ohe rush through a canyon enclosed by vertical walls."

Here, after breaking through the pile rock formation , the Wolfsteiner Ohe dug up to 100 meters deep into the dark pile slate rock of the Buchberger secondary pile . Built on 14 February 1961 the conservation area Buchberger and Reschbachleite (officially: the protection of the landscape part Buchberger- and Reschbachleite, in the communities Freyung Hohenau, Kumreut and wasching, district Wolfenstein ) has a size of 184 hectares. The wild water gorge was named one of the 100 most beautiful geotopes in Bavaria by the Bavarian Ministry of the Environment in 2003 . Further south the water flows into the Ilz .

The Freyung carbide works is located on the west of the two entrances to the gorge . The few remains of Neuenbuchberg Castle are located nearby . This had been the seat of the Puchbergs since the 13th century, which later passed to the Passau bishops. At the carbide plant, the hiking trail leads through a short tunnel, shortening a river bend.

The gorge is designated by the Bavarian State Office for the Environment (LfU) as a geoscientifically valuable geotope (geotope number: 272R003). It was also awarded the official seal of approval for Bavaria's most beautiful geotopes by the LfU .