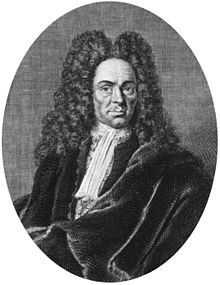 Jacob Leupold (* July 22, 1674 in Planitz ; † January 12, 1727 in Leipzig ) was a German mechanic ( engineer in today's sense ), instrument maker and author of the technical encyclopedia Theatrum Machinarum (1724–1727), which is known as the “last great German-language summary of all mechanical engineering before the arrival of the new power and work machines ”applies.

Jacob Leupold was born on July 22, 1674 as the son of the craftsman Georg Leupold († 1707) and his wife Magdalena. Already in his early childhood, Jacob Leupold received a solid technical training from his father, who was a carpenter , turner , watchmaker and sculptor .

Due to his physical frailty and therefore poor qualifications for the profession of craftsman, his father decided to finance private schooling for him in addition to this practical training, and then sent him to the Latin school in Zwickau. After he had to break off the studies of theology in Jena and Wittenberg due to financial bottlenecks , he was admitted to Leipzig in 1696 without a registration fee . By this time he had already deepened his scientific knowledge by attending the lectures of the well-known astronomer and mathematician Erhard Weigel in Jena and studying the mathematical library of Professor Martin Knorre in Wittenberg .

He earned his living by tutoring for pupils and students as well as for craftsmen. In the course of this activity, he manufactured various technical instruments with which he could experimentally illustrate physical problem cases. The success of this approach prompted Leupold in 1699 to give up his studies and turn to mechanics entirely. Encouraged by the remark of his teacher Gottlob Friedrich Seligmann that there were enough preachers in Leipzig, but there was a shortage of artists, he founded a workshop in Leipzig.

In 1701 Jacob Leupold took a job as a housefather ( caretaker ) and economist at the St. Georgs-Lazarett, which ensured him a regular income and at the same time left enough time to work with the mechanics. In the same year he married Anna Elisabeth Tyck, with whom he fathered 3 sons and 3 daughters, all of whom except the youngest daughter died at an early age. After the death of Anna Elisabeth (1713/1714) he married Maria Gotthun to his wife in 1715. At this time he gave up his job in the hospital and expanded his workshop to a mechanical factory , where he employed skilled workers such as gunsmiths , locksmiths and compass smiths.

Leupold's efforts to be employed as a mechanic at the University of Leipzig failed because the local craftsmen presumably vetoed them out of fear of competition. Due to the quality of his work and publications, Leupold came into contact with recognized scientists such as the scholar Christian Wolff and was elected a member of the Royal Prussian Academy of Sciences in 1715 . In 1719 he was appointed to the Prussian Kommerzienrat . In addition, his work received a lot of attention abroad. For example, Peter the Great repeatedly invited him to St. Petersburg , which Leupold refused.

In 1720 Leupold announced his plans for a technical encyclopedia in a prospectus as the perfect news of those mechanical writings or Theatro Machinarum Universali ; the financing of this major project was from Emperor Charles VI. , the sovereign August the Strong and the Academy of Sciences guaranteed. In 1725 he became a royal Saxon councilor and mining commissioner. In exercising this activity, he undertook numerous trips to the Ore Mountains , during which he planned the establishment of a machine house for teaching purposes at the Freiberg mining authority in Saxony and the establishment of a mining and mechanics school in Leipzig . His early death at the age of 52 on January 12, 1727 prevented his realization of these plans. The HTWK Leipzig honors him by awarding the Jacob Leupold Medal as the highest honor.

Before Jacob Leupold began to write his technical encyclopedia, he stood out through a variety of works. He developed his first air pump as early as 1705 . In addition, his workshop offered a wide range of mechanical equipment, such as measuring instruments of all kinds and fire engines . A large number of the offer were own inventions or improvements to existing machines. The following two drafts should be emphasized here:

Leupold distinguished himself by not being a manual mechanic in the contemporary understanding, but manufacturing his equipment on a modern scientific basis and in a form of division of labor.

After he announced the publication of the technical encyclopedia Theatrum Machinarum in 1720 with the aim of compiling an encyclopedic summary of the contemporary state of the art, he traveled at home and abroad to compile an extensive collection of technical literature.

In 1724 the first volume, Theatrum Machinarum Generale, or Schauplatz des Grund Mechanical Sciences, was published by the Leipzig publisher Gleditsch. In the foreword, Leupold names the target group of the work. He emphasizes that his remarks are "mainly not aimed at the learned and experienced mathematicians, (but that) everyone has the opportunity to use their existing writings." In the following three years (until 1727) Leupold published another seven volumes with about 430 copper plates. Another 20 parts should follow until the encyclopedia was completed. Because of his death he could not finish his work.

The Theatrum Machinarum set standards for future machine technology. In addition to the written statements, numerous construction drawings illustrate the processes. Since Leupold wrote and clearly defined the technical terms in German and Latin, he made an important contribution to the development of German-language technical terminology . He also has the merit of further developing the technical theories of his predecessors.

Leupold's work was determined by a pronounced sense of utility, since for him his machine designs were primarily intended to increase prosperity in the country. His main goal was not the higher theoretical demands, but the effectiveness and the most economically sensible construction and operation of his equipment.

Another important aspect of his work is his discussion of the engineering profession. Leupold no longer understood this to be a war engineer, but a civil engineer. What stands out here is the division of those who deal with mechanics into three different groups of people:

This distinction was forward-looking at the time. In this sense, Leupold saw himself as a Practicus .

Volumes of the Theatrum Machinarum written by Jacob Leupold :

Cover sheet of the description of the Leipzig hay scales