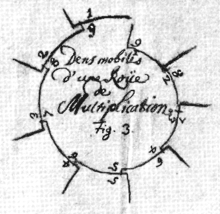 Sprocket from the sketch of a Leibniz calculating machine

Replica according to Leibniz

A sprout wheel is a gear with an adjustable number of teeth. It mainly serves as a drive for mechanical calculating machines . Sprossenradmaschinen are also called Odhner machines in Europe (after Willgodt Theophil Odhner ).

From the hand of Gottfried Wilhelm Leibniz (1646-1716), the first known design was a sprocket wheel. It is believed that he considered this sprocket as a drive for his calculating machines in addition to the staggered roller he later used . In his sprout wheel design, a tooth had to be lifted that raised all of his predecessors. A corresponding adjustment device and the Sprossenradkörper are not available on the drawing.

The Italian astronomer and mathematics professor Giovanni Poleni (1683–1761) built a wooden calculating machine with a weight drive, which he described on page 27 in 1709 in "Miscellanea". The sprocket he designed worked with nine folding rungs. With a first model that was not yet working satisfactorily, Poleni showed that its drive principle was suitable. A second machine, more carefully made and made of harder wood, succeeded as he wished. This machine could process a maximum of three-digit numbers; it was big and unwieldy; the speed of the gear train was severely braked, and the tens transfer is said to have worked poorly. In summary, as Bischoff writes, it was “an imperfect and useless tool”. However, the publication of the construction and functioning of the Poleni machine may have served as an inspiration to later designers of Sprossenradmaschinen.

From the years 1841 and 1848, two round sprocket machines by the French doctor Didier Roth come from , which are now in the Paris Musée National des Techniques . He received an English patent for this invention in 1843. Although the machines are said to have been unreliable, the sprocket wheels used were mature. Further works by Roth are a classification of calculating machines from 1843 and a small, elongated adding machine called "Additionneur" from 1841, which was operated using an adjustment pen. 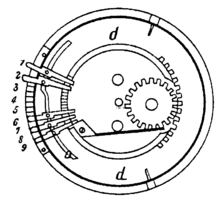 English patent No. 9816 from Wertheimber

Another sprocket wheel machine, which was patented in 1843, comes from the Englishman David Isaac Wertheimber . The sprocket wheel later used by Odhner is very similar to Wertheimber's construction. Both adjust the rungs with the help of a curved slot. Nothing is known about a realization of Wertheimber's machine. 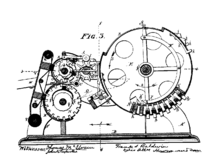 The American Frank Stephen Baldwin (1838–1925) sent a complete description and drawings of a sprocket wheel machine he had developed to the American Patent Office on October 5, 1872 in order to protect his rights to this invention. On September 8, 1873, this calculating machine or a further development was registered for a patent, which was granted to him on February 2, 1875 with the number 159 244. The rungs are resiliently mounted in its construction and are pressed out of the Sprossenradkörper with a semicircular collar. Similar to the later Odhner calculators, Baldwin also uses the sprocket to carry the tens. A printing unit for these machines is also included in his patent drawings . By 1874 ten of these "Baldwin calculators" had been produced: Although they were designed for series production, large numbers were never produced. His machine is said to have been too expensive and prone to mechanical errors. 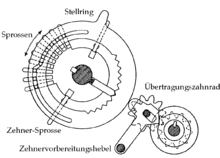 The following describes the sprout wheel principle of the Odhner machines:

Nine rungs are mounted in radially milled grooves in a rung wheel body. Opposite the Sprossenradkörper a cam slot is made in the rotatable adjusting ring, which holds the rungs in their position. If the adjusting ring is turned clockwise, the rungs slide outwards one after the other. A scale on the housing of the calculating machine is divided so that the number of rungs pushed out is equal to the number set. If the entire sprocket is now turned by the drive crank, zero to nine sprockets engage in a transmission gear.

In addition to the nine rungs, there are two spring-mounted tens rungs on the sprocket wheel, which can be pressed into the processing level by the tens preparation lever of the counter.

While four-species machines with staggered roller drive were evidently easier to develop to market maturity in the 19th century , machines with sprocket wheels took over the European market at the beginning of the 20th century.

These were inexpensive to manufacture, had compact dimensions and were low-maintenance, even under rough conditions. Individual model series were produced in some 10,000 pieces.

At the end of the development history of mechanical calculating machines, they had to compete with the first electronic computers. Here the relay roller had the advantage that it could be turned quickly by the motor. In the case of the sprout wheel machines, however, a significantly larger mass had to be moved (sprout wheel drums weighed up to 2 kg), which put a heavy load on the engine and mechanics.

Both staggered roller machines and those with sprocket wheels were equipped with motors at an early stage. In Germany, before 1939, the Carl Walther company (Zella-Mehlis) successfully manufactured the EMKD model, in which the electric motor drove the sprocket drum and the counter slide. The result was a small semi-automatic machine in which the division - after presetting the values ​​- took place automatically. In the case of multiplications, a selector lever was used that processed the second factor semi-automatically, digit by digit.

The Swedish company Facit had the greatest success with motorized sprocket machines. Their machines appeared on the world market even before 1939 and achieved large sales up until the 1970s. Their greatest advantage was the quiet operation and the quick setting of all values ​​by means of buttons.

The last Sprossenradmaschinen were inexpensive hand-operated devices like the Brunsviga 13 RM pictured. This was produced in Spain until the 1960s.