A staggered roller is a cylinder on which nine teeth of different lengths are applied. It is used as a drive for certain mechanical calculating machines .

The shiftable gear (so-called transmission gear ; here red) shown below the relay roller is connected to the setting mechanism of the calculating machine. If the number 0 is set, this gear is located on the left edge of the relay roller, if a 9 has been set, correspondingly on the right edge.

The number of meshing teeth of the rotating relay roller corresponds to the number set. If 0 is set, the transmission gear is not rotated because there is no tooth on the left edge of the relay roller. If 5 is set, five teeth will engage, the remaining four are too short to intervene. 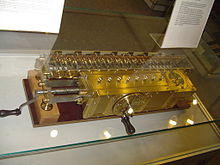 Replica of the Leibniz calculating machine

Gottfried Wilhelm Leibniz (1646–1716) developed the first calculating machine based on the relay roller principle . He presented the principle to the Royal Society in London in 1673 . The machine developed from this was almost usable, that is, some sample tasks for functional testing were calculated on it.

The development work on the first usable calculating machine of the Württemberg pastor Philipp Matthäus Hahn (1739–1790) began in 1770. It was completed in 1774 and presented to the public. Hahn and his brother-in-law Schuster produced a total of 8 to 12 machines.

Knowing a brief description of Hahn's machine, Johann Helfrich von Müller (1746–1830) from Hesse developed a similar calculating machine. Its construction showed some improvements. It had a bell that rang when capacity was exceeded, and it could be converted for calculating in non-decimal number systems. In addition to the construction, Müller dealt with machine computing. He compared this to calculating with pen and paper and came to the conclusion that machine calculating was more rational.

Staggered roller machines were first produced in series by Charles Xavier Thomas (1785–1870), probably from 1820 onwards. By 1878, around 1500 machines had been produced in his factory.