Cantus Verkehrsgesellschaft mbH was founded on December 2, 2005 , in which Hamburger Hochbahn AG and HLB each held 50 percent. After the Northeast Hesse network was awarded to HLB in April 2005, cantus started operations on December 10, 2006, initially for ten years. After HHA's local rail passenger transport activities were outsourced to BeNEX GmbH , this company took over the HHA stake in mid-2007.

After the new tender for the unchanged Northeast Hesse network from December 11, 2016 for 15 years on June 5, 2013, cantus was again awarded the contract on March 24, 2014. Since then, an annual traffic performance of 3.9 million train kilometers has been achieved with 21 electric multiple units of the Stadler FLIRT type . 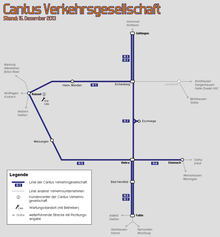 Cantus took over local rail transport on the following routes in December 2006:

The lines RB7 and RB8 are winged between Göttingen and Eichenberg .

In addition, cantus Verkehrsgesellschaft took part in the tender for regional transport in the Bavarian sub-network Würzburg, which extends in one line to Schlüchtern south of Fulda , but was defeated by DB Regio AG in the competition procedure . The application for the “Saale-Thuringia-Südharz” network, which was awarded to Abellio Rail Central Germany , was equally unsuccessful .

14 three- and 6 four-part electric multiple units of the Stadler FLIRT type were ordered for operation, which will be used on the four lines. The three-part vehicles have 343 seats and standing places (including 167 seats), the four-part vehicles 457 seats and standing places (including 219 seats). They have the designation 427 (middle part: 827) in the three-part version, 428 (middle part: 828) in the four-part version. Since they have already been delivered earlier, the vehicles reversed in November 2006 to test drive on the Friedberg-Hanau railway (operated by the HLB) and the timetable Route 209.60 Berlin-Lichtenberg - Eberswalde - Frankfurt (Oder) by the, ODEG is operated on which the HHA is involved.

Another four-part multiple unit was purchased in the summer of 2012. A total of 21 vehicles are now available. Half of the vehicles are owned by HLB and half by HHA.

The announcements in the trains were spoken by Helga Bayertz .