Cover page of the current German edition from 1998

The culinary art guide (French original title: Le Guide Culinaire - Aide-mémoire de cuisine pratique, IPA : lə ɡid kylinɛːʁ ) is a standard work of culinary literature that has appeared in several editions and translations since 1903. It was written by the French master chef Georges Auguste Escoffier with the participation of Philéas Gilbert and Émile Fetu .

It is aimed primarily at professional chefs and trained chefs, but is also used by ambitious amateur chefs. The book briefly describes around 5000 recipes and the production of basic preparations. In addition, general basic principles of the preparation of the various types of meat , fish and vegetables are presented, as well as spices, drinks and basic ingredients. 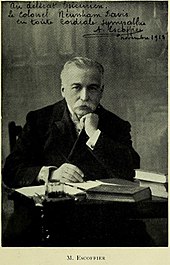 Auguste Escoffier (1846–1935) was a reformer of the culinary arts who simplified and systematized the sometimes highly complicated and elaborate recipes of the hitherto classic cuisine. He used seasonal ingredients and avoided garnishes to a large extent. He also simplified and structured the organizational process in professional kitchens.

The culinary guide was the culmination of his endeavors, with which he greatly influenced French haute cuisine .

“ Just as a bad wine does not develop into a fine drop on the bottle, just as little can a really good dish be produced with inferior material. "

The book has 18 chapters and an appendix. Each chapter begins with general introductory explanations of the content and is then usually divided into several sub-chapters, each of which deals with specific aspects of the topic addressed. The introduction is followed by a systematic overview of the basic types of preparation and arrangement and then several hundred short descriptions of special recipes and types of preparation per chapter, so that around 5000 descriptions / recipes are compiled in the entire book. In the German translation, both the original French name and the German translation are given in the headings of the individual topic articles and recipes.

Despite its age, the culinary art guide is still a regularly used work and has a permanent place in the training of chefs. In Germany, too, it is still used today as a textbook in vocational schools.

Although there were extensive collections of recipes and methods even before the book was published, Escoffier attached importance not only to the aspect of completeness but also to the systematics and feasibility of the recipes. He simplified many regulations and was one of the first to emphasize the freshness and quality of raw materials. He also reformed the organizational process in professional kitchens by systematizing the process and assigning individual chefs special tasks , depending on the size of the team and the type of kitchen.

With his school he had a strong influence on the culinary arts of the late 19th and early 20th centuries, and his students and their descendants basically continued to use his methodology, even if it was further developed and modified. The cookbook Le Répertoire de la Cuisine ("The repertoire of the kitchen") by Escoffier students Theodore Gringoire and Louis Saulnier was written as a companion book to the culinary guide ; apart from the French original edition, however, there is only an English translation.