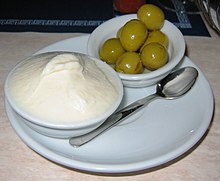 Aioli or Allioli ( French : Aïoli ; from Occitan or Catalan all i oli , "garlic and oil") is a cold cream that comes from the Mediterranean region and consists mainly of garlic , olive oil and salt . Aioli is served as a starter with bread or olives and as an addition to meat , fish , pizza and vegetables .

Homemade aioli according to a Valencian recipe made from garlic, salt, egg yolk and olive oil

In the traditional aioli, which consists only of garlic and oil, cloves of garlic are grated in a mortar . Then the oil is added in a thin stream while stirring continuously with the pestle until a viscous cream is formed. If too much or too quickly oil is added, the emulsion can separate again and the aioli coagulate. Milk , a piece of boiled potato or egg yolk are therefore also added as an emulsifier . In the classic kitchen, the aioli is made from hard-boiled egg yolk, finely crushed garlic and, like a mayonnaise, coated with oil. Then season with lemon juice and cayenne pepper .

A recipe for aioli was first written down in 1024. The sauce has been prepared for a while. Refinements and additions to recipes resulted in numerous variations of the aioli. The best known today is the variant from Maó (Spanish Mahón ) on Menorca . One can often read that this is the original version of French mayonnaise . However, this view cannot be substantiated by reputable sources. The etymology of the word mayonnaise is completely unclear, there are several interpretations.

Aioli is also a typical Provencal dish: steamed potatoes , carrots and green beans , served with sea ​​snails and a piece of fish fillet (the classic is watered stockfish made from cod ) and the aioli described above.