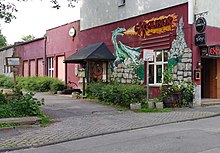 Escape route is a term from building regulations and fire protection. It marks the access for the emergency services , which must always be kept clear for fire fighting, rescue or rescue of the injured. It is also an escape route as an evacuation route for those affected by danger in a building.

The term “escape route” is not used in the Model Building Regulations (MBO). It is only used in the reason for changing the MBO in the September 2012 version as "escape route length" and refers to the requirement of Section 35 (2) No. 1 MBO: "At least one exit must be from every place in a lounge and a basement a necessary stairwell or outside in a maximum distance of 35 m. "

The escape route is subject to the length requirements in accordance with Section 35 Paragraph 2 No. 1 MBO or Section 5 of ASR A 2.3 "Escape routes and emergency exits, escape and rescue plan". ASR A 2.3 specifies the requirements in accordance with Section 4, Paragraph 4 and Section 2.3 of the Annex to the Workplace Ordinance on the establishment and operation of escape routes and emergency exits as well as on the escape and rescue plan in order to ensure safe exit from the workplace in the event of danger.

Building law only places requirements on escape routes such as smoke sections in hallways, the flammability of the building materials to be used and the fire resistance of the room-enclosing components and the opening locks to other rooms or usage units . The first escape route is the part of the escape route that meets the requirements of building regulations. In special building regulations such as the model directive on structural fire protection in industrial buildings, the model regulation on the construction and operation of meeting places and the model regulation of the ARGEBAU “building supervision” commission on the construction and operation of sales outlets, corridors within the usage unit are also used as escape routes designated.

The escape routes are intended to achieve two fire protection objectives defined in the building regulations : in the event of a fire, the rescue of people and animals and effective extinguishing work to be made possible (cf. § 14 MBO).

In Germany and Austria, building regulations are the legislative competence of the federal states . All countries have accordingly issued their own building codes, but their regulations on escape routes are largely uniform. In Germany they are based on the MBO, to which reference is made below.

§ 14 MBO defines the protection goals for fire protection in buildings, according to which u. a. the rescue of people and animals as well as effective fire fighting must be possible (the term rescue also includes self-rescue ( escape )). The spread of fire and smoke must also be prevented.

Based on this definition of the protection goal, the building regulations place requirements on the number and nature of the routes out of a building to the outside, i.e. the escape routes . At the same time, safe exits also represent safe entrances that the fire brigade needs for effective extinguishing work. The requirements for the escape routes re. The number and type are specified in Section 33 MBO. The structural regulations for the escape routes (how the spread of fire and smoke must be prevented) can be found in Sections 34 - 38 MBO, together with further requirements for stairs, stairwells, exits, corridors, windows, doors and fencing ( the components that can be part of an escape route ).

In §§ 34 - 36 the terms “ necessary stairs ”, “necessary stairwell” and “necessary hallway” “the space between the necessary stairwell and the exit to the open” are introduced. This designates the components through which an escape route (usually the first, structurally implemented) route leads. The further meaning of these terms lies in the stipulation that every usage unit that has no exit on the ground floor and directly into the open must be accessible via structural escape routes. According to these regulations z. B. a retractable staircase is not permitted as a necessary staircase, which means that an attic floor that has been developed in this way must not contain any lounges.

The central element of § 33 MBO is the requirement for two independent escape routes to the outside for each usage unit (e.g. apartment, practice, shop, etc.) with common rooms (rooms that are not only intended or suitable for the temporary stay of people) . Independent of each other means that if the first escape route fails, the second is not affected. However, this requirement is limited by the admission that both escape routes within one floor may lead over the same necessary corridor . For all floors that are not at ground level, the first escape route must lead via a necessary staircase. The second escape route may lead via the fire brigade's rescue equipment (portable ladders or aerial rescue vehicles or turntable ladders ). No structural escape route is required for usage units in which at least one exit to the open can be reached from every point in a lounge at a maximum distance of 35 m.

An escape route is a shortest route into the open, marked by appropriate pictograms, which you can use yourself without outside help . An escape is an escape route, which one can tread with the help of rescue workers, or place of use unit that can be "angeleitert" from the street from the fire department.

A technical or ventilation center will usually not be a separate usage unit. But if there is a permanent lounge, e.g. B. the work / writing station of the caretaker, set up, the regulations on escape routes apply again.

In addition to stipulating the fire behavior of load-bearing components such as walls and ceilings, the building regulations also set requirements for wall and ceiling coverings and floor coverings.

Jurisprudence and literature often derive from these statements in connection with §14 MBO (general requirement for preventive fire protection and the possibility of rescuing people and extinguishing work) that the escape routes are to be kept largely free of furniture and other objects that represent an additional fire load .

Exceptions are considered possible on a case-by-case basis: Fire loads are permitted to a limited extent if a building has two independent structural escape routes and the additional fire load is limited to one of the two escape routes. A fire alarm system can provide additional security.

In the case of facade insulation in the context of an old building renovation with polystyrene panels up to 15 cm thick, there is no structural review of the fire protection (then escape and rescue routes). Through the thermal insulation or insulated roller shutter boxes, the clear width of the window, which was originally planned as an emergency exit, could be narrowed.

In general: "Windows that serve as escape routes ... must be at least 0.90 m × 1.20 m in the clear and not higher than 1.20 m above the upper edge of the floor." (Section 37 (5) MBO). There are deviations in the dimensions in the individual federal states, e.g. B. in Bavaria 0.60 × 1.00 m. In Baden-Württemberg and Hamburg there is no fixed size, there the minimum dimensions according to MBO should be used.

For events , § 7 of the Model Assembly Ordinance (MVStättVO) specifies dimensions for escape routes. A distinction is made according to the type, location and specific features of the meeting place.

The following dimensions are mandatory: