Portrait of an Ubier woman from Cologne. The hair-covering hoods were part of the costume of married women

Gravestone of Fannius of the Ubier tribe, bodyguard ( corporis custos ) of Emperor Nero; he lived for 28 years and was buried by his collega (comrade) in Rome

The Ubier ( Latin Ubii ) were a West Germanic people who Caesar described as already civilized.

The Ubier initially lived on the right bank of the Rhine in Germania magna , as the Romans called it, opposite the Treverern and south of the Sugambrer . Their area extended fairly from the Sieg over the Lahn to the lower Main .

The Ubier were one of the first Germanic tribes to engage in lively trade with the Romans, to train them with their sons, and finally to agree to pay tributes. In addition, they made auxiliary troops (preferably cavalry) available to the Romans who, according to their political motto “ Divide et impera ”, used them to suppress other Germanic tribes and subject them to tribute. This behavior of the Ubians brought them the mistrust, envy and finally also the hatred of the other neighboring tribes, which is why there were numerous arguments between the Ubians and their neighbors.

The main town of Ubii was Ara or Oppidum Ubiorum which later by Claudius to Colonia Claudia Ara Agrippinensium appointed Cologne. After their resettlement, the Ubier, or at least the "Cologne part" of the tribe, were also known as the "Agrippinenser" (Agrippinenses).

The northernmost border of the Ubier area was marked by the Gelfbach (from the Middle Ages Mühlenbach) which flows into the Rhine at the former Roman fort Gelduba near Krefeld-Gellep . The Germanic Cugernians , a subgroup of the Sugambri on the right bank of the Rhine , settled north of this brook . 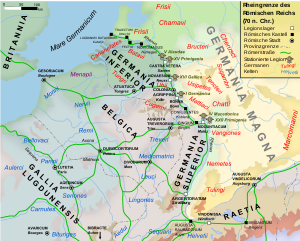 Roman Gaul and Germania on the right bank of the Rhine around AD 70.

The information given by Tacitus notes that the subject Ubier was relocated to the left bank of the Rhine in the area of ​​today's Cologne as the time of the resettlement of Agrippa. The move of the Ubians was probably a lengthy process that was officially confirmed or concluded by Agrippa. Agrippa developed the concept of protecting the Rhine line through the direct presence of Roman troops, but above all through the settlement of reliable Rome-friendly tribal groups on the left bank of the Rhine (Ubier and Batavers; establishment of the central place oppidum Ubiorum) and through permanent contractual relationships with the tribes bordering on the right of the Rhine . Rome's policy was mainly aimed (with a few exceptions) at keeping land seekers out of the secure provincial area.

The Ubians only took part in the uprising of Julius Civilis in AD 69 and 70, and only for a short time. After the expansion of the Franks across the Rhine from the 3rd century onwards and the later capture of Cologne, the largely Romanized descendants of the Ubians were absorbed into the Rhine Franks , who were also called Ripuarians after the 6th century .