This article refers to the Rhine Franconian part of the Germanic tribal union of the Franks. For the western half of the later Duchy of Franconia see West Franconia . For the student union of the same name see Marburger Burschenschaft Rheinfranken . 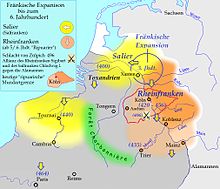 The Rhine Franks (also Ripuarian / Ribuarian Franks , Ripuarier / Ribuarier or Ripuaren / Ribuaren , from old Franconian rīp- 'Ufer'; in the Cologne area also called Cologne Francs ) is traditionally one of two or three groups of Francs in historical studies . In the transition period between late antiquity and the early Middle Ages, these rose to become the most powerful Germanic tribe in Western and Central Europe. The sub-tribe of the Rhine Franconia is said to have formed through the unification of individual smaller ethnic groups in the 4th century; his main settlement area was along the Rhine (hence the name). The Rhine Franconia spread along the river from Cologne via Mainz to Worms and Speyer . In contrast, Matthias Springer took the view that the alleged division of the Franks into two or three, and thus also the Rhine Francs, is a research construct based on a misinterpretation of the later medieval sources.

Germanic tribes on the Lower Germanic Limes, from which the Franconian tribal union was to emerge later

Ethnogenesis of the Franks

A people named Franci is first mentioned in the Latin written sources at the end of the 3rd century (later authors use it for invading Germanic tribes in the middle of the 3rd century). Behind it were actually several small tribes called proto-Franks. They first settled to the right of the Rhine, often changed their settlement area and repeatedly pushed forward - in changing alliances - to raids into Gallo-Roman territory. In the course of time, the individual tribal associations eventually formed the large Franconian tribe in a complex process of ethnogenesis . These are classically divided into a sub-tribe of the Salfranken settling in the northwest and a sub-tribe of the Rhine Franconia that settle on the Middle Rhine and south of it. Old Germanic tribes that were absorbed in this way in the Franconian tribal conglomerate included:

The Batavians and the Ubians were only partially involved in the genesis of the Franks, who were already Romanized at the time of the ethnogenesis of the Franks and therefore merged with the rest of the Gallo-Roman population of their settlement areas in the Franconian tribal association.

Subgroups of the Franks

According to traditional historical science, shortly after the emergence of the large Franconian tribe in the Dutch-German border area on the Lower Rhine, the two main rivers of the Sal and Rhine Francs emerged from which the Franks later emerged. The Salfranken (sometimes also referred to as Salier) would have settled in Salland on the IJssel and the Rhine delta, from where they spread to Toxandria and northern Gaul, where they laid the foundations for the empires of the Merovingians and the later Franconian empire . The Rhine Franconians, on the other hand, had settled between the Lower Rhine and Middle Rhine, conquered Cologne in the middle of the 5th century and spread from there further south and west. From the 5th / 6th In the 19th century the Salian and Rhine Franconian areas were united under common kings. For the Rhine Franconians who settled in the greater Cologne area, the special designation "Ripuarian Franks" or "Ripuarier" ("bank residents") developed from the 6th century, from which the designation Ripuarien for this region is derived. The sub-tribe of the Rhine Franconians or the sub-group of the Ripuarier finally gave the name to the tribal law book of the Lex Ripuaria , whereas the law of the Sal-Franconian brother tribe was laid down in the Lex Salica .

However, recent research has shown that the Lex Ripuaria is a much more recent modification of the Lex Salica, not a revision necessarily created for a separate ethnic group. This means that the word "Ripuaria" was first used in the 7th, possibly the 8th century. The word riparii , which occurs in older sources and was often associated with a sub-tribe of the Rhine Franks, has nothing to do with the Ripuariians, but rather goes back to terms from the Roman administration. The term “Rhine Franconia” does not appear in any source from the time of the Franconian Empire, and the related term Francia Rinensis is first documented by the geographer of Ravenna in the 9th century . As a result of these results, Matthias Springer concluded that the distinction between Sal Franconia and Rhine Franconia did not correspond in any way to historical circumstances: “The Franks of the Migration Period and the early Merovingian period were not divided into two parts. There were as many Franconian groups as there were Franconian rulers - both before Clovis († 511) and after him. "

Be distinguished from nitric and Rhine francs partial nor Mosel Franken , a subgroup of the "Rhine francs," the beginning of the 5th century on the upper Rhine and the Mosel were located. 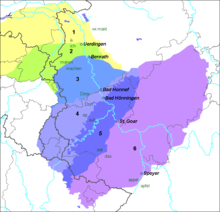 The conceptual differences between today's dialects must be distinguished from historical considerations about the Franconian sub-peoples. Only the dialects across the Rhine from Southwest Bergisch via Cologne to Aachen are referred to as " Ripuarian ". According to the Rhenish fan , the dialects on the Lower Rhine, which are also known as Niederrheinisches or Niederfränkisches Platt, and the dialects on the Moselle and in the Rhine-Main area, which are referred to as " Mosel-Franconian " and " Rhine-Franconian ", are to be distinguished from this.

Expansion of the "Rhine Franconia"

In the 4th century there are repeated incursions of Franks into the left bank of the Rhine, including Trier and Cologne several times. In 352 the Roman border collapsed and the tribes known as the Rhine Franconia settled on the left bank of the Rhine. In the following decades (356–387) there were multiple clashes with the Romans, which produced changeable successes. At the same time, however, some Frankish military leaders under the Roman emperors Valentinian I and Gratian achieved top positions in the Roman army in the fight against the Alemanni ( e.g. Merobaudes , Richomer , Bauto and Arbogast the Elder ).

In the years 388 and 389 "Rhine Franconia" under their leaders Marcomer , Gennobaudes and Sunno broke through the Lower Rhine Limes and devastated the area around Cologne, but agreed on a peace agreement with Emperor Valentinian II . Nevertheless, unrest on the Rhine continued afterwards, so that around 402 the seat of the Praetorian prefecture had to be relocated from the former Roman imperial city of Augusta Treverorum (today's Trier ) to Arelate (today Arles ). Between 413 and 420 Franconian groups attacked Augusta Treverorum several times, and around 435 the Franks finally conquered the city. In 459/461 Cologne too finally fell into the hands of the "Rhine Franconians", who then established themselves on the Middle Rhine as far as Mainz. Cologne became the seat of a king who resided in the local governor's palace ( praetorium ). The inhabitants of the Roman city (Romans, Gallo-Romans, but also Teutons who lived in peace with the Romans such as the Ubians ) were - as far as they had not fled - subjugated and merged into Frankish society in the future. A further expansion of the Rhine Franconian tribes took place in the years 470 to 485 to the south-west, where they became neighbors of the Burgundians , but also found connection to the settlement areas of the groups known as Moselle and Sal Franconia . In the following decades the Sal Franconian Empire under the kings Childeric I and his son Clovis I managed to conquer all of Gaul. During the wars against the Alamanni, which culminated in the Battle of Zülpich , the latter received support from the Cologne-based “Rhine Franconian” king Sigibert .

Kingdom of the "Rhine Franconia"

In research, the attempt was made by various Franconian rulers to classify them as "Rhine Franconia". This includes the Frankish king Theudomer , of whom information is only known from the Frankish historian Gregor von Tours . He was the son of Richomer and Asycla, was first a Roman consul and later a Frankish petty king, and finally executed by the Romans together with his mother. The same applies to Sigismer , who is mentioned in the sources for the year 469 as the "king's son". Because of his name and the fact that he married a Burgundian princess, which is more likely for a Rhine-Franconian ruler than for a Sal-Franconian ruler, due to strategic alliance considerations, he was counted among the Rhine Franks.

The Frankish kingdom, whose rulers resided in Cologne, was clearly classified as Rhine-Franconian. The only longer reigning king is Sigibert von Köln , who ruled around the turn of the 5th to the 6th century. Sigibert defeated the Alemanni in the battle of Zülpich in 496/497 in an alliance with the Merovingian Clovis I from Sal Franconia . In the fight Sigibert suffered a knee injury, as a result of which he was nicknamed "the lame". Around 508/509, Chloderich , Sigibert's son, was instigated by Clovis to assassinate his father. Shortly afterwards he was accused of parricide by Clovis and killed. Clovis then moved into Cologne and was recognized as king by the local greats .

Clovis ruled over the now united Frankish populated territories until his death in 511. Thereafter, Clovis's son Theuderich I inherited this part of the empire, later called Austrasia or Austria , which extended over the old “Sal Franconian” areas in Toxandria over the area of ​​the “Rhine Franconia” to the Thuringian border. This area was ruled by kings from the Merovingian line and united with the other Franconian areas.