The title of this article is ambiguous. Further meanings are listed under Zeuthen (disambiguation) .

Location on the city limits of Berlin

Zeuthen is a municipality in the Dahme-Spreewald district in Brandenburg . It is located on the south-eastern outskirts of Berlin on the Dahme and the Zeuthener See .

Zeuthen has two town centers, the old village of Miersdorf, southwest of today's center, and the same that was created after the construction of the Berlin – Görlitz railway line between the train station and the lake. The Miersdorfer Werder residential area is on the east side of the lake and can only be reached via the territory of Wildau and Königs Wusterhausen . There used to be a ferry between the two shores of the lake, but the ferry traffic has been stopped due to insufficient turnover.

Neighboring communities are Eichwalde in the north, Schulzendorf and Schönefeld in the west, Wildau in the south, Königs Wusterhausen in the southeast and Berlin-Schmöckwitz in the northeast. At the borders with Eichwalde, Schulzendorf and Wildau, the development merges seamlessly with those of the neighboring communities, and it is often difficult to assign the properties to communities without maps. Zeuthen thus forms the center of a settlement body consisting of these four communities.

The Zeuthen municipal area is largely built-up, the open spaces mainly consist of forest and water. There is almost no agricultural land.

Zeuthen includes the inhabited parts of the municipality Miersdorf and Zeuthen as well as the residential areas Falkenhorst, Hankelsablage, Heideberg, Hochland, Miersdorfer Werder and Wüstemark .

The cul-de-sac village was first mentioned in 1375 as Czyten , Czuten in the land book of Charles IV . The land book describes the place as a “little village” with no information about Hufen , which only consisted of “some arable land”. There were already 14 fishermen's houses and a village mayor who had to pay bees interest. The village was owned by Apitz and von Buden before 1375 and probably came to Miersdorf in 1414 . In 1450, as before, no information was given about the hooves, but there were twelve heirs. Of these, eight were still desolate in 1480 . In that year the place came to the Diricke family and from there before 1496 to the Enderlein family in Miersdorf. However, they did not keep it for long, but passed it on to the citizen Brackow zu Berlin, who kept it until 1517. Then a judge appeared in Rauch zu Brandenburg, who owned Zeuthen until after 1547. Subsequently, the office of Köpenick took over the place before 1577. This year another Schulze appeared, for the first time also a Krüger and three other fishermen. They paid military interest and fish. There was a Zeidelheide, several meadows as well as the Radeacker and, for the first time, 2.5 Hufen land and an electoral dairy . In 1589 a farm with a size of 203 acres and three bison 2 bushels of rye, 1 bison and 4 bushels of barley, 1 bison and 12 bushels of oat seed appeared. Another 24 acres of meadow yielded 29 loads of hay. Up to 36 cattle stood in the yard; there was a garden half an acre. In the village now living six Kossäten and five one Hufner and the mayor and the Kruger. A Kossät farmed three acres, although it remains unclear whether it was not also a fisherman.

Before the Thirty Years War , there were five and a half kossas and a shepherd in the village in 1624. Zeuthen seemed to have been less affected by the acts of war than comparable villages. In any case, in 1652 there were already five Kossaites with three sons living in the village.

In 1700, evidence of a small knight's seat appeared for the first time, but it had since burned down. From then on, the arable land was cultivated by the Kossati. They also operated five fish weirs. In the vicinity of the village, a place called Sandacker, called "Rahdeland", was created. This was an area that was cleared by the Schmöckwitz huller together with the Kruger. In 1704 the Schulzen and the Kruger Land owned 2 bushels of rye, 2.5 bushels of barley seed and a meadow for four loads of hay. Three cottages also owned one to two bushels of rye and barley seeds and a bushel of oat seeds. The meadows brought about two to three loads of hay. Half a kossate had no field, but a meadow that brought in a load of hay. In 1711 there were no more hooves, so that there were only the five and a half kossaets, a shepherd and a boy. Half a Kossatenhof went off until 1745, while the remaining farms again managed one Hufe each. A school and family house had been built outside the village. This appeared again in 1756, for the first time with a schoolmaster who was also one of the five Büdner. There were also five ossets with one hoof each and two half osses, one of which only had half a hoof. In 1771 there were five and a half gables (= residential houses) in the village; there was a shepherd and four pairs of householders.

In the year 1801 there were five whole cottagers and seven Büdner living in Zeuthen. There was a jug and, for the first time, a windmill with the Rauchfangwerder colony. This colony was mentioned again in 1840; there were also 21 residential buildings. In 1858 there were 14 farm owners, the 18 servants and maidservants. There were also eight part-time farmers and eight workers. There were 14 properties in the village: six were between 30 and 300 acres (together 580 acres) and eight under 5 acres (together 10 acres). A master tailor and an apprentice work in the village as well as a master cooper, also with an apprentice. In 1860 there was one public, 14 residential and 26 farm buildings. The district was 600 acres: 275 acres were arable, 200 acres were forest, 88 acres were pastures, 27 acres were meadows and 10 acres were on farms.

After the Second World War , 49 hectares expropriated from the state forest were divided. In 1955 a type I LPG was founded , which in 1958 was merged with LPG Wildau to form LPG Wildau-Zeuthen Type III. They in turn merged in 1959 to form LPG Zeuthen-Miersdorf. In 1960 this LPG existed with 50 members and 370 hectares of agricultural land. In 1973 there was VEB Kombinat Leuchtenbau Leipzig, Zeuthen plant, PGH hairdressing, forklift repair, LPG Wildau-Zeuthen with the Zeuthen and Wildau operating parts and the Wüstemark district forester in Zeuthen. 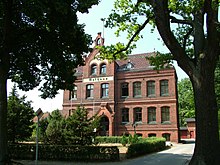 The community council consists of 22 community representatives and the full-time mayor.

In the mayoral election on September 24, 2017, Herzberger was elected for a term of eight years with 62.9% of the valid votes.

Partnerships exist with the small Polish town of Małomice (Mallmitz) in Lower Silesia and the Swiss spa town of Interlaken in the canton of Bern . 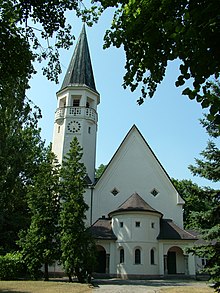 Location of the DESY research center

Since 1992, Zeuthen has been one of the two locations of the DESY research center (Institute for High Energy Physics until 1991) in the Helmholtz Association alongside Hamburg-Bahrenfeld .

The SC Eintracht Miersdorf / Zeuthen plays in the football regional league South Brandenburg in the 2018/19 season.