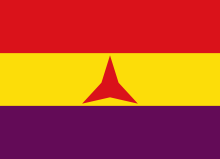 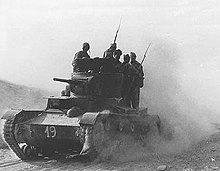 Interbrigadists of the XI. International Brigade sided with the Spanish Republic during the Battle of Belchite (1937)

The International Brigades , shortly Interbrigades , in Spanish las Brigadas Internacionales , were of the Communist International recruited and trained military volunteer units (militia) , in the Spanish Civil War on the side of the Spanish Republic , with its elected government against the of Franco cited coup and its of Associations supported by Hitler and Mussolini (national Spanish coalition) fought. In 1936, the republican parliamentary leader Diego Martínez Barrio reserved five numbers of the Spanish Army for the International Brigades: the numbers of XI. to XV.

Decision to set up an international brigade

On August 3, 1936, the Comintern passed a general resolution to set up an International Brigade in support of Spain. Only on September 18, 1936, after Stalin had made a decision, was a meeting called in Paris in which Eugen Fried announced Stalin's decision to set up an international brigade. As a result, communist parties from various countries organized the recruitment of volunteers. Important members of the formed organizing committee were André Marty and his right-hand man Luigi Longo , who were in Spain, as well as the head of the Paris office, Giuseppe Di Vittorio . Other organizers were Josip Broz Tito , who was also in Paris, and Milovan Đilas . Both organized the flow of volunteers from Yugoslavia to France. Furthermore, the Soviet secret service officer Walter Germanowitsch Kriwitzki organized the recruitment of volunteers in The Hague .

Paris became the main recruiting center. The recruiting office was on rue Lafayette. After the personal details were recorded and an admission procedure was carried out, the volunteers were distributed to various trade union houses (Maison de Peuple). One of these trade union houses was at 8 rue Mathourin-Moreau. After a few days, the volunteers traveled by train from Paris with the so-called Volunteer Express via Perpignan , Barcelona to Albacete . The central base of the international brigades was located in the former barracks of the Guardia Civil on Calle de la Libertad in Albacete .

The Organizing Committee for the Establishment of an International Brigade was transformed into a military council on October 26, 1936. Members of the military council were Vital Gaymann (Vidal), Vittorio Vidali (Carlos Contreras) and Karol Świerczewski (General Walter). The council's interpreter was Constancia de la Mora . The military council resided in a villa on the outskirts of Albacete.

The interbrigades were set up on October 9, 1936. Military commander of the XI. International Brigade was Manfred Stern (General Kleber). On October 12th, the first 650 volunteers reached the port of Alicante on the steamer “Ciudad de Barcelona” . The first battalions to be set up in Alicante were the André Marty battalion , the Dąbrowski battalion and the Edgar André battalion . On November 8, 1936, the three battalions coming from Albacete reached Madrid . The three battalions were sent directly to the suburbs of Madrid. There fought other battalions of the International Brigades, which on November 1, 1936 in the XI. International Brigade were grouped. One of these battalions that fought on the Madrid front was the German Thälmann battalion . On 3 March 1937, the Inter brigades brought to that of Mussolini sent to Spain expeditionary force Corpo Truppe Volontarie in Guadalajara a crushing defeat at.

In 1938 the British and French forced the Spanish Republic to disband the International Brigade. The fighters therefore received pro forma Spanish citizenship and were accepted into the regular Spanish army.

The nominal strength of the international brigades was 18,000 men, but this was never achieved due to the continuing losses. More than half of the 40,000 interbrigadists were killed. Moderately to poorly equipped and additionally limited by the language problem, the interbrigadists, who saw themselves as elite troops because they failed to recognize their fighting power , made up for only a few inadequacies with enthusiasm .

New formation of battalions from October 1936

Composition in the summer of 1937

Internal currents and the "Army of the Comintern"

Conflicts within the groups fighting on the republican side must be seen against the background of different strategies in the fight against European fascism. While the Communist Party of Spain and the Soviet Union relied on a partial alliance with bourgeois or social democratic forces ( popular front policy ), a social revolution was in the foreground for anarchist, left-wing socialist and Trotskyist groups .

Historiography sometimes claims that the International Brigades were misused as the Comintern army. Recent research refutes this. The brigades never posed a threat to the republic and were not deployed in Barcelona in May 1937 . In the ranks of the brigades, there was strict discipline (possibly appropriate from a military point of view), but no terror regime. In contrast, the author Antony Beevor reports on an internment camp run by the International Brigades, Camp Lukacs , where no fewer than 4,000 men were interned between August 1st and November 1st. Camp Lukacs was 10 miles from Albacete , the headquarters of the International Brigades. The historian Hugh Thomas calls these camps training camps, in which deserters were also liquidated.

Flight and fate of the "Spain fighters" 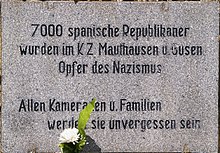 On the brigadists interned in Franco's concentration camps in Spain , from 1938 - with National Socialist support - racial ideologically motivated medical experiments were carried out to investigate the alleged physical and psychological deformations that occurred in supporters of " Marxism ".

After the Catalonia offensive in February 1939, many brigadists fled across the border to France. There they were sent to internment camps that were quickly improvised along the French Mediterranean coast (including in Saint-Cyprien (Pyrénées-Orientales) , Camp d'Agde internment camp and Argelès-sur-Mer internment camp ), where they first had to sleep on the bare ground. The French authorities gave them the choice of either staying in the internment camp or returning to Germany.

After the German occupation of France in June 1940, many were extradited to Germany via the Drancy transit camp under Section 19 of the armistice agreement . In the German Reich they were sent to concentration camps - especially Dachau ( interbrigadist block ), Mauthausen and Auschwitz - which many of the Red Spaniards did not survive. One of the survivors was Kurt Goldstein . Many brigadists also managed to escape from French internment. Some of them joined the Belgian or French resistance . Well-known members of the Resistance were Artur London , Pierre Georges , Henri Rol-Tanguy , Marcel Lamant , Marcel Langer and Joseph Epstein .

Even before the outbreak of the Second World War , in May 1939, 500 brigadists emigrated to the USSR via Le Havre in France . Shortly after arriving in Leningrad , many of them were arrested by the NKVD and interned in gulags . After his arrival in Russia in October 1937 Kazimiek Cechowskie and in January 1938 Gustav Reicher (pseudonym Rwal) were shot by the NKVD . One of the internees was Manfred Stern ( Emilio Kléber ). He died in Sosnovka labor camp in 1954. Wilhelm Zaisser was also arrested and interned on his return to Moscow. Friends from the IV Office of the Red Army (espionage) managed to get his release with great difficulty. The fate of many Russians is largely unknown. Bersin , Staschewskij, Antonow-Ovsejenko and Kolzow were arrested and liquidated during the Spanish Civil War.

After the Second World War, Stalin persecuted Spanish fighters in the Eastern European countries. B. the Hungarian Foreign Minister László Rajk . He was convicted and executed in a show trial in 1949. After his execution, other Spanish fighters were arrested and sentenced to death. In contrast, the former Political Commissar of the International Brigades Ernő Gerő rose to the position of senior security officer in his home country, Hungary, after the Second World War . Under the dictatorial ruling Mátyás Rákosi , he became Minister of the Interior in 1952 and continued to persecute opponents of the regime. The most important support was the " security police " ÁVH , who arrested or killed thousands of Hungarians.

On November 11, 1952, the former Spain fighter Wacław Komar was arrested in Poland . As head of the military secret service (Section II of the General Staff LWP), he was arrested along with other employees of his department or the security apparatus. Most of those arrested were fighters from the International Brigades. There is evidence that almost all of those arrested were liquidated. The Spanish brigadists Bron, Flato and Leder were also liquidated. Furthermore, the members of the former XIII. International Brigade (Dąbrowski) suspected of sabotage and espionage.

After Stalin's death in November 1954, a number of former Spanish fighters were released from prison in Hungary.

In February 1956, Khrushchev mentioned in his speech at the XX. Congress of the CPSU that the liquidation of Spanish leadership was a regrettable mistake and a momentous act. 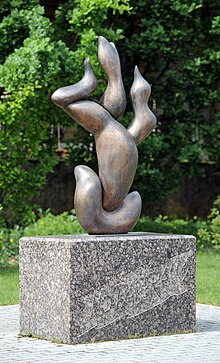 In 2003, Luxembourg's parliament unanimously adopted a law proposed by LSAP MPs Mars Di Bartolomeo and Alex Bodry , which retrospectively rehabilitates the 102 participants from Luxembourg. Following the recommendation of the non-intervention office in London, Luxembourg had banned residents of Luxembourg from participating in the civil war by a law of April 10, 1937. This did not stop residents from Dudelange and Esch-sur-Alzette in particular . After Franco's victory, around thirty Luxembourgers were imprisoned by the Germans and some of them were deported to concentration camps. Italian nationals were extradited to Italy and faced a similar fate. The last two survivors, Henri Joachim from Dudelange and Albert Santer from Hautcharage , together with their Italian colleague Carlo Alvisi, had drawn attention to their legal situation at a conference in 1996. A circle of friends was formed around the historians Serge Hoffmann, Henri Wehenkel and Paul Cerf, with the aim of abolishing the 1937 law. In 2000, Prime Minister Jean-Claude Juncker awarded the survivors the National Order of Merit.

The rehabilitation of the Swiss fighters in Spain came into effect on September 1st, 2009.

The International Brigades set up several children's homes for orphans of fallen Spanish Republicans. The Thälmann Battalion of the XI. The brigade converted the summer residence of the Marquesa de Cubas-Herice that had been confiscated from it into a children's home. The “Campo Lukacz” children's home, named after the Hungarian writer Máté Zalka , who died on the Huesca front , was built in the Murcia medical center . Zalka commanded the XII under the pseudonym General Lukacz. Brigade. The “Solidaridad” home was set up in Benisa . And when Francoist airmen destroyed the orphanage in the Villa Beimler in Benicàssim, it was rebuilt in the mountains as the “Amistad” home.

Memorial to the German fighters in Spain by Fritz Cremer ( Volkspark Friedrichshain , Berlin)

Song of the International Brigades

(Melody based on Rafael Espinosa and Carlos Palacio, text by Erich Weinert )