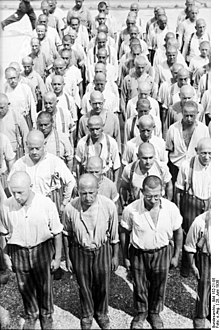 As Interbrigadistenblock the designated SS in Dachau those barracks, in the so-called Spanish fighters were detained.

The volunteers ( International Brigades ) had fought for the Spanish Republic in the civil war there . They fled from the fascist Franco troops. Some of them were imprisoned in France and transferred to Nazi Germany via the Drancy transit camp . The first large transport (130 Austrians) arrived at the Dachau camp on May 1, 1941. Further transports of prisoners with different nationalities followed. On May 17, 1944 there were 536 Spanish fighters, as they were colloquially known, in the Dachau camp. The interbrigadists appeared very self-confident towards the SS . The elder of the access block (access barracks) Willi Eifler described their courageous demeanor when they were asked by the camp leader why they had gone to Spain. The prison functionaries also encountered resistance from the interbrigadists:

“When the senior man tried to hit one of them on their new block, suddenly everyone was standing in a circle around him (...) They didn't say a word, just stood and looked. The head of the room shouted: 'Get rid of your skin! What is it to you what I got with that? ' But they did not move from the spot, stood and looked and came closer and closer. Then the head of the room became frightened and withdrew into the corner. In the future he did not touch any of them (...) "

In another case, a block senior had dealt a blow to an interbrigadist and the latter hit back unexpectedly. Because of "mutiny" ( camp regulations ), the block elder, who had gotten a black eye, brought him to the report leader . The Rapportführer did not take any action in this case, which was unusual for the Dachau camp. He merely pointed out to the block elder that an inmate functionary was not allowed to beat other inmates, but had to contact the SS.

In another case, the interbrigadist Pleticha was hit on the head with a ladle by an elder in the room. Pleticha struck back, and the elder got a punch in the face. Pleticha was subsequently beaten by several prison functionaries. However, there were no further consequences on the part of the SS in this case either.

The interbrigadists had a militant, anti-fascist past behind them. Because of their solidarity with the other prisoners and their fearless behavior in the camp, they were generally popular with the concentration camp inmates.

Not all Spanish fighters came to the Dachau camp. The SS immediately deported some of them to Auschwitz , for example the Jew Kurt Goldstein .