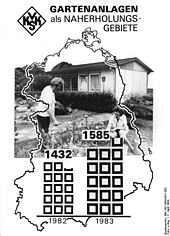 Gardens as recreational areas in the GDR

The Association of Allotment Gardeners, Settlers and Small Animal Breeders ( VKSK for short ) was a mass organization in the German Democratic Republic that was dissolved in 1990 .

The Council of Ministers of the GDR issued on 22 April 1954, the "Regulation for the promotion of allotment and settlement and raising small animals," which laid the foundations for a new association was founded, with the proviso that the future VKSK should operate the planning of allotments. The already existing district associations were subordinated to the local councils and managed there as a legal entity.

On April 22, 1959, the Central Committee agreed to the re-establishment of the Central Association of the VKSK. This was founded on November 29, 1959 in Leipzig and was organized centrally as an independent organization. With the "Ordinance on allotment gardens and settlement systems and the breeding of small animals" of December 3, 1959, the VKSK was now recognized (Section 1, Paragraph 1) and was given the sole right to build allotment gardens (Section 4). In 1962 the VKSK had around 850,000 members. Association days in Leipzig (1963 and 1966) and Berlin (1965) followed.

The SED took on May 22, 1976 on their IX. Congress launched a new program, due to which the allotment gardeners were more socially recognized and promoted. On September 15, 1977, the GDR government ordered the number of allotment gardens to be increased. Further association days took place in Magdeburg (1977), Karl-Marx-Stadt (1982) and Dresden (1988).

In 1988 the VKSK had around 1.5 million members. In addition to the division of allotment holders specialist divisions were like Fowl - Rassekaninchen-, ornamental fowl -, Exoten- and canaries - Edelpelztier-, goat and Milchschafe-, pedigree dogs and Rassekatzen- and - Beekeepers connected.

First secretaries of the board

Due to the Bavarian successor regulation to the radical decree, applicants in Bavaria for the public service have to declare a position in the VKSK. There is a similar regulation in Thuringia.