Spreewald gherkins in a jar, here pickled with garlic

The EU community symbol protected geographical indication according to Regulation (EEC) No. 628/2008 of the European Commission

Spreewälder Gurken is a protected geographical indication for pickled cucumbers from Brandenburg .

As early as the 1870s, Theodor Fontane thought that the Spreewald cucumber was at the forefront of agricultural products in the Brandenburg Spreewald :

“The Spreewald products have their most excellent stacking place in Lübbenau and only go out into the world from here. Among these products, the pickles come first. In one of the previous years a single dealer sold 800 shock a week. That wouldn't say anything in Hamburg or Liverpool, where people are used to calculating according to loads and tons, but "every place has its yardstick," which, when considered, results in a good reputation for this 800 shock. "

While the fermentation process in large barrels used to take several weeks, the cucumbers are now available on the market after one day's processing - be it as  mustard , spice or sour cucumbers . During processing in the twenty or so inlays, the cucumbers are heated to seventy degrees Celsius with the addition of caustic soda . Additions such as basil , lemon balm , vine, cherry or nut leaves give the Spreewald cucumber its taste.

Cucumber fields can be found in the entire Spreewald , the largest part of which has been specially protected as the Spreewald Biosphere Reserve since 1990 . The following places offer specials about and around the cucumber:

The cucumber became famous in the West in 2003 with the multi-award-winning film Good Bye, Lenin! by Wolfgang Becker . In this tragic comedy , shortly after the fall of the Wall , Daniel Brühl had great difficulties in finding the Spreewald cucumbers, which his mother ( Katrin Saß ) loved so much , which he absolutely needed in order to be able to fool his sick mother into believing that what she saw as the "ideal GDR world" would continue to exist . 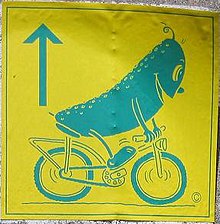 There is also a cucumber cycle path - the tour logo shows a laughing cucumber on a bicycle.

At the annual Spreewald Marathon , which is held in the disciplines of running, cycling, hiking, paddling and inline skating, the motto at the start is “On the cucumber, get set, go”.