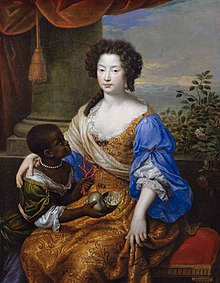 Louise Renée de Penancoët de Kérouaille, Duchess of Portsmouth (* 1649 ; † November 14, 1734 in Paris ), was one of the mistresses of Charles II of England and lady-in-waiting Henrietta Anne Stuarts , the Duchess of Orléans.

Louise was the only daughter of Wilhelm (Guillaume) de Penancourt and his wife Marie de Plaeuc de Timeur. The name de Kérouaille was a modification of the Breton nobility de Penhoet. The family wrote themselves de Kérouaille , but in France the spellings Queroul , Keroual or Kereol were also common. In England the family name was also written Querouailles, or Carwell or Carewell as a nickname.

Louise's exact date of birth is unknown. Very early on, she was given to the household of the Duchess of Orléans, Henrietta Anne Stuart, Charles II's favorite sister, and introduced to the court. It is believed that her family introduced Louise so early to court in the hope that she would attract attention to the French King Louis XIV and become mistress.

Louise accompanied Henrietta Anne Stuart when she visited her brother Charles II in England in 1670. Shortly after her return to France, Henrietta died completely unexpectedly. Her sudden death gave rise to rumors that she had been poisoned by her husband, Duke Philip I of Orléans , because the relationship between the two was not the best for various reasons, a rumor that has not yet been confirmed.

For a long time it was assumed that Louis XIV had sent Louise to the English court as a spy. The anti-French Protestants in England in particular accused Charles II of sympathizing with Catholicism for accepting Louise.

Deprived of her job and employer by her sudden death, George Villiers, 2nd Duke of Buckingham , turned to Louise. With a new favorite for the king, he planned to overthrow his cousin Barbara Villiers - another famous mistress of the king. He went to Paris and persuaded Louise to go to London , but then left her penniless and without further news in Dieppe for a month . Only after a month did he send Louise a ship and money so that she could continue her voyage. She never forgave Villiers for this insult, and their relationship cooled noticeably after their arrival in London. Charles II, supposedly enchanted by Louise on her first visit, made her the lady-in-waiting of his wife Katharina von Braganza .

Louise is described by biographers as a personality with a strong will and intelligence. She is said to have hidden both under naivety and helplessness in order to ultimately get her way as a supposedly weak woman. She was also described as "childlike beauty" (according to John Evelyn ). Her many allegedly serious illnesses and suicide threats are famous, which she uttered and let out whenever she had the feeling that she had lost the interest of the king or that she had drawn the king's wrath through high gambling debts. Nell Gwyn , another mistress of Charles II, also called her Squintabella because of her notorious scenes . When Nell Gwyn's carriage was attacked because it was mistaken for the carriage of Louise, who was not particularly popular with the people, Nell is said to have shouted from the carriage: “ You are mistaking me, I'm the Protestant whore! ".

On May 29, 1672, Louise gave birth to their only son, Charles II, Charles Lennox, who was named Duke of Richmond at the age of three and later Duke of Lennox . On August 19, 1673 the King bestowed on her the titles of Baroness Petersfield , Countess of Fareham and Duchess of Portsmouth for life . Their income soared to enormous heights. In 1677 her annual income amounted to 27,300 English pounds, not counting the regular gifts from the French court, which were very much criticized and suspected in England.

In spite of her outbursts and scenes, she could keep the interest of the English king in her until his death. In 1677 she fell ill for a long time and went to France for a visit in 1685. She made sure that Charles II, who secretly converted to Catholicism shortly before his death, did not die without confession and the final rites .

Shortly after the death of Charles II, Louise moved to France. There, through the mediation of Charles II, she and her son were awarded the French title of Duchesse and Duc d' Aubigny in 1684 . Their income from their English possessions dried up, either through the government of Karl's brother Jakob II./VII. , or by the revolution of 1688. No more precise information can be determined.

In the last years of her life she lived heavily in debt in Aubigny-sur-Nère . The French King Louis XIV and later Philip II of Orléans supported them with money to protect them from their creditors. She died in Paris on November 14, 1734.