This article deals with the artist Dieter Roth. For a description of the boxer of the same name, see Dieter Roth (Boxer) .

Karl-Dietrich Roth (born April 21, 1930 in Hanover ; † June 5, 1998 in Basel ) was a Swiss poet, graphic artist and intermedial action and object artist . He is considered a representative of Concrete Poetry . As an artist, he temporarily signed as Diter Rot , with other freely invented names and simply as Dieter Roth . 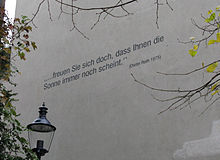 "... you are happy that the sun is still shining on you." by Dieter Roth on a house wall in Basel

During the 1960s, Roth took part in happenings and flux events. He created art objects from organic material that were subject to a process of gradual change and decay, including airtight spice, mold and z. B. Chocolate objects that have been eaten by cocoa moths. Together with Daniel Spoerri and André Thomkins he made works of the Eat-Art . In the 1970s he designed a large number of book objects in terms of content and graphics that are close to the Dadaist work of Kurt Schwitters .

The eventful life story of the Swiss Abroad, who was born in Hanover in 1930, first moved from Nazi Germany to Zurich and later to Bern . From 1947 to 1951 he was apprenticed to the graphic artist Friedrich Wüthrich. In 1955 he designed patterns for textiles in Copenhagen , followed by positions in Iceland , America and Germany . From then on, Roth commuted his life between Iceland, where he founded the publishing house Forlag Editions together with the Icelandic poet Einar Bragi, which published some of Roth's works, as well as Germany and Switzerland. In 1958 he went to the USA in Philadelphia at the School of Art with a one-way ticket on a vague job offer . When he didn't get the job he had hoped for, he tried to gain a foothold in New York City . The Swiss Herbert Matter, who was interested in Roth's constructivist work at the time and gave him a teaching position at Yale University , and later a position in the advertising department of the Geigy research laboratories in Yonkers near New York, helped him out of financial hardship . While he often drowned his wages out of frustration with his situation, Roth laboriously saved up money for a flight back to Iceland. In 1967 he met Dorothy Iannone , who became his partner, and for whom he took on the role of a "male muse ". Roth wrote numerous poems for Iannone, she painted him many times a. a. in the artistic processing of the common everyday life (series Dialogues , 1968/69)

During later stays in New York he got to know the Fluxus artists, composed with them, but criticized their morals: " I just don't believe that asceticism is good for anyone, except that it represents a triumph for those who practice it " . In the 1960s he accelerated his artistic production, he sometimes created 100 pictures a day. With “literary sausages” and “mold pictures” he broke from the two dimensions of graphics into space.

Richard Hamilton became aware of Roth through the literary sausages and proposed him for the Copley Prize. A long-term friendship began with Hamilton, in the course of which pictures and interviews were taken together. Working together was torture for Hamilton, as Roth worked much faster and Hamilton's demands on the finished work were higher: " ... if he had carefully started somewhere, I said: It's already finished, that's good ".

In 2006, based on a concept by the artist and musician Wolfgang Müller, a compilation was published in collaboration with Bayerischer Rundfunk , on which interpreters such as Mouse on Mars , Andreas Dorau or Stereo Total set texts by Roth to music.

In 2013 his play Murmel Murmel from 1974 premiered at the Volksbühne Berlin under the direction of Herbert Fritsch . On 176 printed pages it consists solely of the permanent repetition of the word marble .

2014, the label released Psych.KG the LP nvr Ainfache Eraignise , on the Commissioner Hjuler a resume Dieter Roth in the writing style and diction as cut-up - reading presented.

Roth was twice a Documenta participant: 1968 at the 4th documenta and 1977 at the Documenta 6 . It was also exhibited posthumously at Documenta 11 in 2002 . In 1982 he designed the Swiss Pavilion at the Venice Biennale .

The collected interviews, published posthumously in 2002, give the impression that Roth regards the interview as an art form in its own right, to which he attaches great importance. During his lifetime he commissioned Barbara Wien to research tape recordings and to publish all conversations he had had with artists, friends and journalists. He insisted on not deleting anything so that the "nonsense" would not get lost. This "nonsense" includes the recordings and secondary conditions that cannot be used by journalists , for example the "German-tinged" Swiss German that Roth spoke shortly before his death in a thirteen-hour interview with Patrik Frey, as well as interruptions caused by sluggish tapes or tangled cables.

In the 36 interviews, Roth portrays himself as a person eaten away by ambition who is constantly working on role models that he sees as opponents. He recognized the advantages of failing because of his own demands early on: “ Because I remembered: I cannot acquire this security. Maintaining security is much more difficult than living in uncertainty. In the uncertainty you can do anything you want, smear, piss, chat and also do kitsch ... I can get into the restlessness and the uncertainty and there I actually feel safe because I realize that I can make a living from it ".

Roth's openness in the talks is striking. He uses interviews as common "light music", in which he recites material from life and work. With Dieter Schwarz, who dealt with Roth's literary work early on in his dissertation in Zurich, the artist conducts a continuation interview, eleven parts of which appeared in “Tell”. The journalist Irmelin Lebeer-Hossmann conducted the most extensive interview in the volume on several days in 1976 and 1979 with the artist about the work he had created to date. Roth emphasizes to her that his paintings serve to finance books. It is not as important as “ writing… or let's say: thinking. And making sentences ”.

Roth was a restless diary writer, two or three of whom he kept in parallel. From them he drew ideas for example for the “shit poems”, which he published in eleven books, or for the “handicraft novels”. In them, the typography is the real hero. Roth speaks of words as "cheap pictures" and indicates that he has no new word art in mind. Rather, he drives criticism of everything that threatens his consciousness. At the age of sixty-seven, Roth corrected Dirk Dobke's dissertation in this sense. He makes a fine note when “typical gallery catalog words” such as “assemblage” and “mixed media” obscure the view of his work. Roth is especially critical of language when he feels hurt. He transforms this injury into abstract considerations, which are then short-circuited with his own feelings: “ When someone thinks about something, it's really just like trying to gain vocabulary. Like a mine that must be exploited ... My life gives me vocabulary with which I can fight other people successfully ”.