The HC Lev Praha ( Czech HC Lev Praha ) was a 2010 and HC Lev Hradec Králové was established hockey club , which shortly after its establishment in the Slovak town of Poprad moved. For the 2011/12 season , the club began playing in the Continental Hockey League . In spring 2012, the Poprad club moved to the Czech capital, Prague . In the 2013/14 season , the club won the runner-up in the KHL . Then the club had to withdraw from the league due to financial problems. The club's home games were played in the Tipsport Arena .

After negotiations about joining the Continental Hockey League between the Czech Ice Hockey Federation and HC Lev Hradec Králové failed, the club's management decided to relocate the team to Poprad , Slovakia , where it will be under the from the 2010/11 season Name HC Lev Poprad should take part in the KHL. The team was divided into the Bobrow Division for its premiere season .

On July 28, the KHL announced that HC Lev would not be allowed to play in the 2010/11 season due to a lack of permits from the Slovak ice hockey association SZLH. In May 2011 the club was accepted into the KHL and started playing for the 2011/12 season .

In the spring of 2012, the Poprad club moved to the Czech capital, Prague , after an agreement on training compensation had been signed with the Czech ice hockey clubs . The new venue was the Tipsport Arena , which HC Lev shares with HC Sparta Prague . Josef Jandač and Jiří Kalous were signed as the new coaching duo .

On September 6, 2012 the face-off for the first KHL game by Lev Prague took place. Dinamo Riga was defeated 2-1 in Prague's Tipsport Arena . The first KHL goal of HC Lev Prague scored the Slovak Ľuboš Bartečko . On October 9, 2012, HC Lev Prague set a new KHL attendance record when the team in the O₂ Arena in front of 16,317 spectators lost 0: 1 to OHK Dynamo with a goal from Alexander Ovetschkin . Lev originally planned to play all games in the O₂ arena, but negotiations with the arena management failed. Finally, they agreed on four dates for the premiere season of HC Lev. 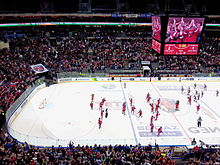 After a series of defeats in October 2012, Josef Jandač was dismissed and Jiří Kalous temporarily took over the coaching position. Two weeks later, Jandač swapped positions with Václav Sýkora , who had previously coached HC Sparta and was now the new head coach of HC Lev. Ultimately, the season ended seventh in the Western Conference. However, HC Lev failed directly in the first playoff round to HK CSKA Moscow . In the following 2013/14 season , HC Lev was the first non-Russian KHL club to reach the final of the Gagarin Cup . In the long final series, HK Metallurg Magnitogorsk was only able to prevail in the seventh game .

After the successful 2013/14 season, the two main owners of the team, the Czech ČKD Group and the Russian-Swiss company A-Energy, had considerable problems securing the budget for the following season. This was primarily due to a strategic realignment of the energy company Gazprom , which is cooperating with both owners, and to the termination of the tender for the expansion of the Czech nuclear power plant in Temelín , for which the Czech-Russian consortium MRI had applied. On July 1, 2014, the club announced the end of gaming operations and the liquidation of the company. At that time, the club had 13 players under contract.