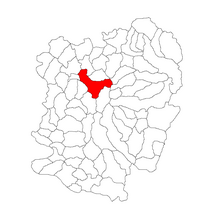 Reșița is located in the northwest of the Caraș-Severin County, on the middle reaches of the Bârzava River , in the Dognecea Mountains at the confluence of the Drum național 58B into the Drum național 58 . The city is an important iron and steel district with a traditional ironworks with blast furnaces . Electrical appliances , chemicals , machines and metals are manufactured here. Finds from Neolithic and Roman times prove that the area of ​​the present-day city has been inhabited for a long time. In the 18th century, Reșița became a metalworking center with the construction of a foundry.

The company, which has been run as the Romanian parade steelworks for decades, goes back to the establishment of the privately owned Austrian State Railroad Company in 1855. Until 1918, however, only seven steam locomotives were manufactured in Reșița, and significant locomotive production did not begin until the 1920s. Reșița produced steam locomotives until around 1960, including numerous replicas of German locomotive designs and, as the class 764.4, a modification of the MÁVAG type 70 for forest railways. This series is interesting insofar as numerous examples of this series have been used by museum and tourist railways throughout Europe (including Serbia, Hungary, Austria, the Czech Republic, Great Britain, France and Germany).

Since 2008, the steelworks has been in the sole ownership of TMK Europe GmbH in Düsseldorf, a subsidiary of the Russian TMK , and mainly produces pipe billets that are used to manufacture seamless pipes.

In 1945 a car called Malaxa was built in Reșița , named after the Romanian industrialist Nicolae Malaxa . Production soon had to be discontinued as the plants were moved to the Soviet Union.

It was not until 1988 that the Reșița tram opened - mainly for reasons of energy savings - and it ran across the valley until 2011. In Resita 21 trams were of the type GT8 the company DUEWAG composed from 1996 Dortmund were taken, in addition trams from Frankfurt .

In 1971 the Institute for Production Engineers was founded in Reșița as a branch of the Polytechnic University of Timișoara . The aim was to meet an acute need of the heavy industry in the Banat Uplands on site: to train production engineers for metallurgy, mechanical engineering and mining, specialists for laboratory analyzes, etc.

20 years later, the independent university "Eftimie Murgu" was founded. The university owes its name to the orthodox pastor and revolutionary of the 1848s, who was involved in the Banat national movement of Romanians. In addition to traditional engineering , management , theology , business administration and accounting as well as public administration are also taught today .

A bribery and sex scandal was uncovered at the university in July 2015. An initially threatened closure of the university does not appear to take place. In contrast, the Ministry of Education approved 437 places for Bachelor and Master’s courses in the 2019/2020 academic year; 510 candidates applied for this in the 2019 summer semester.

Cities in the Caraș-Severin County