Among Romanians (mostly in present-day Romanian Romani , outdated and rarely Rumani ) is defined as:

While the Romanians' own name has always been Romanians , they were called Wallachians by foreigners until the middle of the 19th century - a term that stands for a Romanesque population and is related to the term Welsche .

Romanians as an ethnic group make up the majority of the inhabitants of Romania and the Republic of Moldova . Large ethnic minorities live alongside them in both countries ; On the other hand, Romanians also live as a long-established ethnic minority in some countries in the region (especially in Ukraine , Serbia and Hungary ). The Wallachians of Eastern Serbia are also ethnic Romanians. Since the fall of the Iron Curtain, many Romanians have settled in western, southern and central European countries through labor migration . In 2008 there were 625,278 Romanian citizens living in Italy , making them the largest single group of foreigners there. At the end of 2010 there were around 850,000 Romanians living in Spain .

In dealing with the ethnogenesis of the Romanians, historians, linguists and nationalists have been and still are heavily disputed three questions. 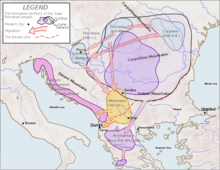 Romanian ethnogenesis according to the continuity theory

A controversial question in science and politics to this day is whether the ethnogenesis of the Romanians took place largely in today's Romanian area or rather outside of today's Romania. This dispute does not concern the formation of the Romanian nation within the last five centuries, but it does concern the time before. There are two main currents in historical studies: While one side tends towards the Romanians coming from the southwestern Balkans, the other side insists that the Romanians are descended from the Romanized population of Dacia. In terms of this dispute, what happened in the centuries after 271 in the formerly Roman Dacia plays an important role . Two theses are presented in this context:

Arguments in favor of the migration thesis

Arguments in favor of the continuity thesis