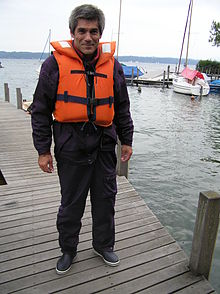 A lifejacket is a portable vest that a person in the water rotates independently in the supine position and keep your head above water, around the airways obstructed.

This property also applies when the person is unconscious , which is why such vests are also known as faint-proof . In contrast to this, a swimming aid is only an aid to reduce the effort required when swimming, provided the person is conscious.

It is compulsory on all ships and in passenger aircraft to carry sufficient life jackets for all passengers and crew members. At sea, good seamanship is imperative to always wear a life jacket in bad weather, in the dark and when the helm / anchor watch. However, this does not prevent going overboard (in contrast to a harness , also called lifebelt or harness ) and also does not guarantee that a person who has fallen overboard can be found again in a man-overboard maneuver and taken on board. A life jacket or life jacket only serves to reduce the necessary swimming movements with the associated expenditure of force and heat loss and to keep unconscious or weak people afloat. This delays the point in time at which exhaustion and hypothermia set in and thus extends the time available for rescue.

Safety campaigns in various countries, including the USA and Great Britain, aim to make wearing a life jacket as natural as buckling up in a car. They point out that life jackets that are not worn are useless.

A life belt should be worn on deck in addition to the life jacket, especially when the sea is rough . This prevents falling overboard. For this, it is necessary that the lifebelt is correctly put on and connected to a fixed point on board with a lifeline. Modern life jackets are often available with an integrated lifebelt.

An important differentiator between life jackets is whether they are designed to be worn permanently or only to be worn in an emergency.

In the case of life jackets that are designed for preventive (preventive and therefore also permanent) wear, both functionality and wearing comfort are in the foreground. During production, the greatest possible freedom of movement is ensured. In addition, because the vests are often worn at work, they should withstand mechanical demands. Life jackets of this type are used in sport and commercial shipping and are often combined with a life belt .

A life jacket from the 1980s from the Spiekeroog I ferry

Life jackets that are not designed for permanent wear are usually carried as life jackets for passengers in aircraft or on ships. Since passengers on a passenger ship do not wear life jackets permanently, these life jackets are designed to be put on as quickly and easily as possible (even by laypeople). Less importance is attached to wearing comfort with these solid vests. They are cheaper to buy, resistant to moisture and hardly need any maintenance. The larger space requirement can be accepted on most ships.

The SOLAS agreement (Chapter III, Rule 32) and the corresponding European and German standards define the following categories of swimming aids and life jackets:

Basically, in each category, the highest permitted body weight of the person wearing the life jacket must be observed. If this weight is not reached or exceeded, the unconscious situation cannot be guaranteed, even with tested vests. The information applicable to the respective lifejacket is usually printed directly on the float.

The unconscious situation can, however, be prevented by various influences. The wrong angle of impact, wrong arm or leg position, material defects and heavy clothing prevent turning into a fainting position. In addition, the term "faint-proof" is not protected for life jackets, which is why this description is no guarantee of true fainting security.

Life jackets must also be able to turn an unconscious person into a supine position to prevent drowning , thanks to the arrangement of the floats . In the case of a clothed adult, the floats must be min. 230 N buoyancy.

Buoyancy aids and simple life jackets with a minimum buoyancy of up to 100 Newtons are almost always designed as solid vests that are filled with a solid, buoyant and non-water-absorbent material, e.g. B. Polystyrene foam or (for older vests) cork . They have the advantage of being inexpensive and almost maintenance-free, but they are comparatively unwieldy, restrict the freedom of movement of the person wearing them and are not or only partially unconscious.

Life jackets with a minimum buoyancy of 150 Newtons and more are usually equipped with inflatable floats and are referred to as automatic or inflatable life jackets.

Inflatable life jackets are equipped with a gas pressure cartridge, which in an emergency can be triggered either automatically by contact of a tablet made of pressed cellulose with water or manually and inflates the life jacket within a very short time (maximum five seconds). In the event that the release mechanism fails, a mouthpiece is attached to the float with which the user can inflate the life jacket with his mouth. The non-hazardous and non-flammable carbon dioxide is used as a propellant for automatic life jackets .

The advantage of inflatable life jackets is that they are smaller in the deflated state and restrict freedom of movement significantly less than solid vests, so experience has shown that they are more likely to be put on. However, disadvantages of automatic life jackets compared to solid vests are the higher need for maintenance due to the release mechanism and the associated maintenance costs as well as the higher acquisition costs.

The lifespan of inflatable life jackets is limited to around 10–15 years. In addition, they should be serviced at least every two years (according to the manufacturer's recommendation). Salty, humid surroundings, dirt and direct sunlight accelerate the aging of the material and the release mechanism. Certain areas of application (e.g. construction, fire brigades, etc.) can shorten the service life and require more frequent maintenance. In some cases there are life jackets with special protective covers for special areas of use, e.g. B. for welding, fire fighting etc.

Vests of the 150N class are only partially unconscious, i.e. In other words, a rotation from the prone position to the secure supine position takes place reliably only with light clothing. Worn over multi-layer clothing including oilskins, these life jackets fail. With most life jackets of the 275N class, however, the rotation is sufficiently fast even with heavy clothing.

Inflatable life jacket in the Bundeswehr

The Bundeswehr used since 1975 in the troops for the crews water moving vehicles the backup flotation collar PS 10 (supply number 4220 - 12 - 156-1330). The manufacturer is Secumar Bernhardt Apparatebau GmbH u. Co. (spelling: SECUMAR). The safety vest was folded like a shell and provided with safety snaps. The pressurized gas cartridge contained 20 g propellant gas. The float was made of fully synthetic, oil and petrol-resistant, rubberized plastic fabric. The exterior color was olive for camouflage; the interior color after activation of the life jacket by the soldier was orange. The life jacket wore a soldier in full riot gear.

The floating bodies of life jackets are always kept in a signal color in order to improve visual perception. Good life jackets have a signal whistle , rescue loop and reflective strips on the float or float. Life jackets can be equipped with a rescue flash or flashing light with permanent light ( distress marker ), which marks your own position and thus facilitates the rescue. This light is activated manually or upon contact with water. Some protective vests automatically send a GPS position signal . A crotch strap ensures that a life jacket does not slip after jumping into the water or that an inflatable life jacket fits properly after inflating. A protective hood, which is pulled over the head and the entire vest when it is inflated, is also useful to reduce the risk of drowning due to heavy rain or waves overflowing.

Inflatable life jackets usually have an integrated lifebelt in the form of a chest strap. However, this chest strap with a D-ring only provides protection against falling from the deck and cannot be compared with fall protection devices that are used e.g. B. used in the commercial sector or when climbing . The lifebelt is also not used to hide z. B. by helicopter that carry their own recovery equipment.

Pictures of various other designs

Cork belts, jackets filled with cork or kapok or inflatable tubes made from animal skins as swimming aids have been known since the Middle Ages. Around 1740 the theologian, physician and writer Johann Friedrich Bachstrom dealt with methods of saving life in his book “ The Art of Swimming ” and describes his invention of a life jacket made of cork.

The first fully functional life jacket to be used on a large scale was developed by Captain Ward, an inspector for the British sea ​​rescue company RNLI . In 1854 he designed a solid life jacket made of cork, which was standard equipment for rescue teams in Great Britain and other countries for many years.

“The French technician M. de Ropp has made a peculiar application of the gases brought into a watery state. The currently used cork cushion life belts are designed in such a way that, because of their annoying weight and shape, they are only put on at the moment of greatest danger, if it is still possible under these circumstances. Mr de Ropp's device, on the other hand, consists, as the Fischer patent office in Vienna tells us, of a sack or belt, which in its normal state takes up very little space and would hardly be noticeable under clothing. At one end of the sack there is a small flacon containing methyl chloride , which extends into the interior of the sack with its end ending in a fine glass tip. There a knife tensioned by means of a spring is held in its position by a ring made of fine filter paper, but as soon as the ring comes into contact with the water, it gives way, the knife cuts through the glass tip and the outflowing content, which immediately becomes gaseous occupies, inflates the cushion or belt and keeps the body floating on the surface. "

The fact that life jackets have to be checked and correctly stored became apparent when the excursion ship PS General Slocum (1904) sank with more than a thousand deaths. The investigations showed that some of the life jackets were partially filled with iron weights because the filler had to reach a certain weight. Cork granules were also used instead of high-quality cork pieces . Furthermore, the vests were always exposed to the elements, so that many vests were damaged when they were put on.