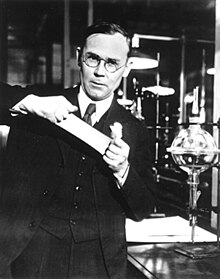 Wallace Hume Carothers (born April 27, 1896 in Burlington , Iowa , † April 29, 1937 in Wilmington , Delaware ) was an American chemist who invented nylon and after whom the Carothers equation is named.

He was the eldest of the four children of Ira Hume and Mary Eveline Carothers, b. McMullin born. In 1914 Carothers graduated from North High School in Des Moines , where he began to take an interest in science and read scientific literature. But his father did not see his potential for scientific work. He had his son learn accounting and writing at Capital City Commercial College in Des Moines in 1914/1915, where he was a teacher and vice president. From 1915 he studied natural sciences and especially chemistry at Tarkio College in Tarkio Township (Missouri) with a bachelor's degree in 1920 (where he led the courses of his chemistry professor when he was drafted in the First World War). In 1921 he earned his master’s degree from the University of Illinois and was then a lecturer at the University of South Dakota in 1921/22 . From 1922 he returned to the University of Illinois, where he worked with Roger Adams in 1924 on The catalytic reduction of, aldehydes with a platinum oxide catalyst, together with a study of the effects of numerous substances on the platinum catalysis of the hydrogenation of benzaldehyde doctorate was. In 1926 he moved to Harvard University as a lecturer in organic chemistry. In 1928 the DuPont company set up a research laboratory for the development of artificial materials and plastics and Carothers was hired as head of research.

In April 1930, his team discovered neoprene (following an idea by Julius Arthur Nieuwland ), a synthetic rubber , and synthesized the first polyester fiber with his group. On February 28, 1935, experiments with polyamides led to nylon ( Julian Werner Hill , among others, was involved ). In February 1937, shortly before his death, Carothers registered a patent for the manufacture of stockings, which contributed to the marketing of the nylon fibers he had developed. There is a legend about the naming of the nylon that Carothers is said to have recognized that the excellent fiber properties of the polyamide he discovered could threaten the Japanese monopoly on silk . According to a legend , the word nylon was formed from his exclamation N ow, y ou l ousy o ld n ipponese . According to other sources, the name nylon came about after Carother's death, probably during World War II . In 1936 Carothers was elected as the first industrial chemist to the US Academy of Sciences .

Carothers was a pioneer in the field of polycondensation reactions ( Carothers equation ), on which the developments of polyesters and polyamides were based.

On February 21, 1936, he married Helen Everett Sweetman, a chemist employed in the patent group in the chemistry division at DuPont.

According to his mother, her son suffered from depression from an early age, which he revealed himself and made him questionable whether he was up to the work at DuPont. After the death of his dearly beloved sister Isobel in January 1937, his manic-depressive behavior intensified . After his wife Helen had informed him that she was pregnant and he assumed that his mental illness could be transmitted, he committed suicide on April 28, 1937 3 days after this notification by taking potassium cyanide . He also felt himself to be a scientific failure, whose scientific achievements were not recognized and appreciated. His only child (Jane) was born after his death on November 27, 1937.

Carothers was an avid reader of poetry and a lover of classical music .