Crinoline is a redirect to this article. See also: Princess Crinoline , film title. 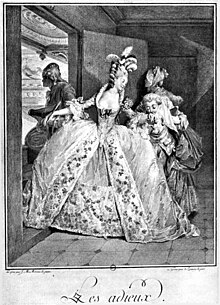 A hoop skirt is an underskirt spread by hoops made of wood, whalebone or spring steel . Depending on the shape and era, a distinction is made between Verdugado , Panier, Crinoline or Tournure .

Shapes of the hoop skirt

The hoop skirt first appeared in Spain around 1470 as a bell-shaped verdugado (Spanish for "guardian of virtue"). Towards the end of the 16th century, a cone-shaped contour emerged from this in Spanish costume . Almost at the same time, an independent, barrel-shaped variant ( Vertugadin ) was developed in France , which can be seen on several portraits of Queen Elizabeth I. Less wealthy women wore substitute the women bacon .

In the first decades of the 17th century , the hoop skirt fell out of fashion again. An exception is Spain, where a broad oval shape developed, which is known from Velázquez pictures.

In France and the rest of Europe, the hoop skirt did not return until around 1715. Initially short and tapered, it soon became dome-shaped and extremely expansive. This early form was very similar to the chicken baskets (i.e. dome-shaped cages) used in markets at that time, hence the name Panier (French "basket"). Around 1730 the pannier flattened at the front and back and retained this transverse oval shape in changing dimensions until it died out.

Paniers of the 18th century were initially made of oilcloth and / or leather and rods, which earned them the name Criarde (French for "screeching woman ") because the materials noisy against each other. Later paniers consisted of wooden or (more often) whalebone hoops that were either drawn into tunnels or joined together with hinges and straps to form foldable frames.

From around 1750, the large, knee-length or calf-length paniers were replaced by jumping skirts , which only reached over the hips, as well as two separate parts that were attached to the hips and tied around a waist band, the posies (from French. poche , bag). The pouches were more comfortable than paniers because you didn't have to sit on tires and, as the name suggests, could also serve as pockets.

Even before the French Revolution , the hoop skirt in bourgeois clothing fell into disuse as part of the orientation towards English fashion and was replaced by the cul de Paris , a cushion that sits on the back. Only in the formal and court areas did he survive until the Revolution, in the English court gala even until the early 19th century.

After 1830 the crinoline as crinoline (Italian-French crin , actually "horsehair fabric ") experienced a renewed renaissance in crinoline fashion , initially as a petticoat made of fabric reinforced and shaped with horsehair, which replaced the previously common wearing of several fabric petticoats. After experiments with whalebone and inflatable rubber tubes, an English construction made of spring steel strips prevailed from 1856 onwards. Despite the relatively high consumption of steel, it was still cheaper than the horsehair models, but above all it was easier to shape into the desired shape. Around 1868 the crinoline reached its lush width with a hem circumference of six to eight meters.

The widespread use of the crinoline not only in the upper class, but also in the working class, led to the mocking of a crinoline mania . Magazines such as Punch published articles and cartoons that satirically deal with it. In particular, the particularly expansive variants were a source of danger for their wearers. In the first two decades of fashion, an estimated 3,000 women died in England alone because their clothes caught fire. Accidents also happened again and again because the hems of clothing got caught in the drive wheels of carriages and machines.

Around 1870 the crinoline was replaced by the tournure (from French tournure for "rotation", Germanized also turnüre ), which no longer encompassed the entire abdomen, but only the skirt over the buttocks with the help of half-frames made of steel, whalebone and / or Horsehair puffed up. After a short break around 1880, it returned in 1883 as the "second tour". Around 1888 the hoop skirt finally disappeared from fashion. Since then it has almost only been used in wedding dresses .

The primary or secondary form of the tour was the crinolette or half crinoline , which, like the tour, was only displayed on the back by tires, but did not have the heavy padding of the tour.

The hoop skirt found an echo - albeit without a hoop - in the war crinoline around 1915/16 and again in the 1950s with the petticoat , which again gave the skirts a pronounced bell-shaped silhouette. 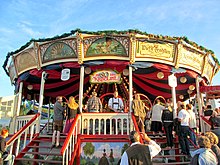 The oldest amusement ride at the Munich Oktoberfest is the crinoline . This carousel mimics the movement of a crinoline via a spring-loaded eccentric suspension in the mast. The design was often to be found in fairgrounds until the 1930s. Today the crinoline is unique because of its design and the musical accompaniment by a brass band.