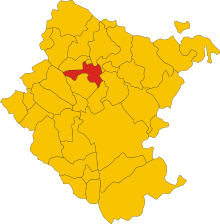 Location of Castel Focognano in the province of Arezzo

The community extends over around 57  km² . It is located about 25 km north of the provincial capital Arezzo and 60 km east of the regional capital Florence in the valley of the Casentino on an eastern branch of the Pratomagno . It lies in the climatic classification of Italian communities in zone E, 2 109 GG. The Arno flows through the municipality over a length of 6 km, the Torrente Rassina spends one of its 15 km in the municipality.

The first inhabitants of the area were the Etruscans , of whom some monuments can still be seen today. During the Second World War, Rassina had an important position as a retreat for the partisans and American soldiers from the fighting in the Casentine mountains and valleys.

After the founding of the Republic of Italy in 1946, the town began to develop economically and industrialize, mainly through calcium extraction and processing. In the 1960s and 1970s, the cement industry became an economic engine for the region.

During excavations between 1966 and 1972, an Etruscan temple measuring 40 × 18.40 m was discovered in the Pieve a Socana district . The excavation site is a few meters east of the apse of the Sant'Antonino church.

In 1992 Rassina was badly affected by a flood of the Amos.