Pieve Santo Stefano is an Italian municipality ( comune ) with 3060 inhabitants (as of December 31, 2019) in the province of Arezzo in the Tuscany region .

Location of Pieve Santo Stefano in the Province of Arezzo

The community extends over around 156  km² . It is located about 25 km northeast of the provincial capital Arezzo and 70 km east of the regional capital Florence in the geographic center of the Tiberina Valley. The Tiber flows through the village , and it borders the Lago di Montedoglio reservoir . The mountain pass Passo di Viamaggio runs through the districts of Sigliano and Viamaggio. 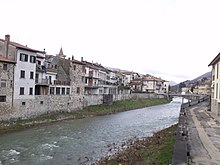 Bank of the Tiber and the town center

There are first traces of the place from the Neolithic and the Copper Age , found in Località La Consuma, while objects from the Bronze Age were found in the Madonnuccia district . The Etruscans left their mark on the Tizzano district . From the Roman era there are still some ruins of bridges that crossed the Tiber at Pozzale, Formole and Sigliano. The area was important for the Roman timber industry , as the timber could easily be transported to Rome via the Tiber. In the time of Emperor Augustus , the place of administration of the VII region of Etruria was incorporated under the rule of Arezzo. The community was first mentioned in a document in 723, still under the name Suppetia or Sulpizia , in a Lombard document . After the region was conquered by the Byzantines , the name of the region was changed to Massa Verona , where Verona stood for Pieve Santo Stefano. After the conquest of Italy by Otto I the Great in 961 , this granted Goffredo d'Ildebrando rule over the area around Pieve, mentioned in a document of December 7, 967, in which the borders of Massa Verona and now Oppidum Veronae were established : The forests of Caprile, the Montefeltro region, Bagno di Romagna , the Monte Penna de La Verna and the Monte Calvano. The document also mentions that the area is in the county of Arezzo. Two centuries later control of the place was passed to the Counts of Montedoglio, who now call it Castelfranco . The construction of the first city wall and the first palazzo as the seat of government also began at this time. Since the today eponymous Pieve of St. Stefan (Santo Stefano, today Pieve Rotta , German: destroyed church, called) was now outside the city wall, the church Buon Gesù was built in 1193 . In the 12th century , the city tower Torre Civica , the bridge Ponte Vecchio and the towers of the city wall were made. In the 13th century, the community got into conflict between Ghibellines and Guelphs , as it was between Florence (Guelphs), Perugia (Guelphs) and Arezzo (Ghibellines). To protect the population, the construction of the castle Castel San Donato began in 1265 , which was completed, but destroyed in 1269 by the Guelfan Perugia. In the same year the first separate statutes were issued. The place then remained under the rule of Arretine for the next twenty years until it was defeated by the Ghibellines in the Battle of Campaldino on June 11, 1289. In 1301 Santo Stefano was retaken by Uguccione della Faggiola , but fell to Perugia in 1337. After several other conquests and recaptures and two rebellions, Pieve submitted to the Republic of Florence on January 6, 1385. The new city wall was completed in 1483. The following years were spent under the Republic of Florence and later in the Duchy of Tuscany (with the exception of the time of the Napoleonic Wars ). On February 14, 1855, Pieve was hit by a flood of the Tiber, which caused great damage to the houses and destroyed some works of art. After the unification of Italy , the municipality of the province of Arezzo fell. Other natural disasters occurred on April 26, 1917 and June 29, 1919, when earthquakes caused severe damage to the buildings. With the rise of fascism in Italy and Mussolini's rise to power in 1923, the judiciary was reorganized, so that Pieve had to submit to the court of Sansepolcro as a result of the decree and the prisons were converted into apartments of the Carabinieri . In 1934, after a break of thirty years, the Tebro-Casentinese connection from the Tiberina valley to the Casentino via the Spinopass began to be built , as Mussolini had recognized that this was the shortest connection from Rome to his place of birth, Predappio , which was not completed until the 1960s. Due to the Second World War, heavy fighting took place in the municipality in 1943/1944, as it is close to the Goth line . In the last days of August, the houses of Pieve were mined and blown up by German soldiers in retreat, only the churches that were probably saved by an intervention of Archpriest Don Guglielmo Bastonero were left out. On August 31, the English liberated the community, but on September 8 a bomb exploded in the campanile , which destroyed the Torre Civica and parts of the town hall. The place ended World War II with almost ninety-nine percent destruction of the buildings and over 100 km of streets were destroyed. The reconstruction, carried out in a hurry and with a lack of money, no longer respected the Renaissance style, but replaced old buildings and palazzi with contemporary buildings. In 1984, on the initiative of journalist Saverio Tutino, the national diary archive (Archivio Diaristico Nazionale) was created, which owns over a thousand diaries and other historical documents. Since then, the place has had the suffix Città del Diario (city of diaries) and has had a parish partnership with the Catalan community of La Roca del Vallès since 2006 , as it is the "Catalan diary town". 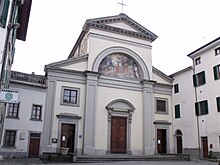