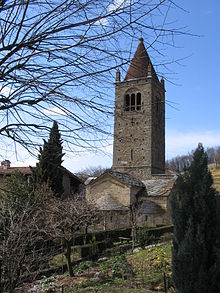 A pieve (Italian outdated for parish ) was in the Middle Ages in rural areas of northern and central Italy a parish and a church with special rights, for example the right to baptism and burial. Only one Pieve had a baptismal font and a cemetery. These pievi were available in large numbers, rarely in cities as competition between the self-sufficient urban population and the feudal bishop's church. An important exception is Santa Maria della Pieve in Arezzo .

Origin and history of the term

Pieve is derived from the Latin plebs, plebis . In the history of the plebeians in the Roman Empire , this term is historically understandable, whereby the pieve in the sense defined here refers to the plebs rustica, i.e. H. the working rural population in the vicinity of cities ( oppida ), founded.

When the Roman social and administrative structures slowly deteriorated in the course of the migration of peoples in late antiquity , a self-sufficient local self-government system of the rural population was established initially in difficult-to-access mountainous and other remote regions, and later across the board. With the spread of Christianity from the 5th century onwards, the village clerical structures (parishes) gradually formed. In these rural Christian communities, the parish also had jurisdiction and took tithes from the peasants.

The core ecclesiastical functions of the parishes (gathering the population for worship, carrying out ceremonies) were established in the whole of northern and central Italy around the 10th century. During this period, the extended Pieve term of the administrative parish was added to the narrower meaning of the church buildings themselves, which were often built on the foundations of Roman villas.

The term in Italian place names

As explained, the historical pieve term is no longer in use today. It has been preserved in numerous place names, generally in rural areas.