This article covers the city of Livorno in Tuscany. There is also the municipality of Livorno Ferraris in the Italian province of Vercelli.

Livorno (in local dialect: Ligorno ) is the capital of the Italian province of the same name, Livorno (LI) in the Tuscany region . The city on the Tyrrhenian Sea has 157,024 inhabitants (as of December 31, 2019) and has one of the largest Italian ports. In the English-speaking world, Livorno is known as Leghorn .

Steep coast between Livorno and Quercianella

Livorno is located in the coastal plain south of the mouth of the Arno river , about 20 km southwest of Pisa . In the north and east, Livorno borders the municipalities of Pisa and Collesalvetti , in the south, where the hills of the Colline livornesi and a rocky cliff begin, on Rosignano Marittimo . The municipality of Livorno also includes the small resort of Quercianella and the island of Gorgona .

The first military settlement near the present port dates from Roman times . The old names of the place (Liburna, Liorna, Livorna) are probably derived from the Roman warship type Liburna . Livorno was first mentioned in 1017 and belonged to the Maritime Republic of Pisa for the next few centuries . At that time the place was a small fishing village and outpost for the defense of the Pisan port (Porto Pisano) . As it gradually silted up, Livorno became more and more important. The place was destroyed several times in wars, for example by the Genoese in 1284 after the victory over the Pisans in the sea ​​battle at Meloria , a small island in front of the city.

Livorno and the Medici

The Florentines, for whom Livorno represented an important access point to the sea, began to develop the port . Between 1518 and 1534, the Darsena Vecchia port basin and the Fortezza Vecchia fortress were built on the orders of the Cardinal and later Pope Giulio de 'Medici and plans by Antonio da Sangallo .

Livorno itself remained insignificant, however, the place had just 749 inhabitants in 1551. The coastal region at the northern end of the Maremma was relatively inhospitable because there were still swamps and malaria prevailed . Prisoners were mainly sent to Livorno.

Under the Grand Dukes Cosimo I and Francesco I , the place was created from 1571 as an "ideal city". Well-known architects of the time such as Bernardo Buontalenti and Alessandro Pieroni were commissioned with the planning . The result was a city with streets oriented at right angles, surrounded by a hexagonal rampart and moats. The swamps in the surrounding area were drained and a navigable canal was built between Livorno and Pisa. The Order of St. Stephen was founded to defend the coast from pirate attacks by the corsairs , and its fleet was stationed in Livorno.

Celebration in the Synagogue of Livorno

Between 1590 and 1603 the “Leggi Livornine” were issued, also called “Costituzione Livornina”. These laws provided immunity, privileges and freedoms for traders of all origins, but above all guaranteed freedom of belief . Through this edict of tolerance , Livorno became a cosmopolitan and multi-religious city over time through the settlement of different population groups. Each group set up their own places of worship and organized themselves in interest groups, the so-called “nazioni”, of which there were a total of nine: Jews , Greeks , English , Germans (including Dutch ), French , Syrian Maronites , Armenians , Muslims and Waldensians . The Sephardic Jews from Spain and Portugal did not have to live in a ghetto in Livorno, as in many other Italian cities . That is why Livorno was also called the "Paradise of the Jews".

From the 17th century to the present

In 1675 Livorno was declared a free port . As a result, the city experienced an economic boom lasting around 200 years. Among other things, Livorno became the most important trading post for the English on the Mediterranean. In addition to trade, especially with the countries of the Levant and Maghreb , handicrafts flourished. Livorno, for example, was a center of goldsmithing and coral processing . The city also grew outside of the original fortifications, especially in a southerly direction. Thanks to the city's tolerant climate, Livorno also became a center of publishing; The work Dei delitti e delle pene by Cesare Beccaria was published anonymously here (1764), and in 1770 the first volume of the Italian edition of the Encyclopédie was printed.

From 1830, after the French occupied Algiers , the North African trade collapsed. After the annexation to the Kingdom of Italy , the city lost the free port in 1865, which caused a further drastic reduction in trade. The economic basis of the city became over time the industry and tourism: The city became, after the English model, the first seaside resort in Italy.

In 1921 the Italian Communist Party was founded in Livorno. During the Second World War, the US Air Force bombed the city massively. The serious damage caused by these air strikes was never completely repaired. The city center was rebuilt in a modern way in the 1950s.

The port of Livorno is one of the most important ports in Italy. The northern part is a trading port, mainly for oil, containers and cars. In the southern part, near the old town, is the old Porto Mediceo , today a ferry port with connections to Corsica , Sardinia , some islands of the Tuscan Archipelago such as Capraia and North Africa, as well as a landing point for large cruise ships .

The city also has a long history of shipbuilding , with Cantiere Navale Orlando shipyard founded in 1865. The company Benetti builds on the site today megayachts . In the north of the city there is an oil refinery of the Italian group ENI . Other branches of business are the mechanical industry and auto parts suppliers (the Bizzarrini company also built cars in Livorno in the 1960s).

The naval academy Accademia Navale , founded by Benedetto Brin and opened in 1881, trains officer candidates for the Italian Navy . The symbol of the academy is the sailing training ship Amerigo Vespucci .

The Pisa airport , the main airport of Tuscany, is located 26 kilometers away from Livorno.

The most important club in the city is the AS Livorno football club , which plays its home games in the Armando Picchi stadium, built in 1933 . Other popular sports are basketball, baseball and fencing (there are several Olympic fencing champions from Livorno).

Livorno is considered the cradle of Italian communism. The Communist Party of Italy was founded here in 1921 . Even though it is a traditional stronghold of the center-left parties, today there is hardly any supporter of communism in Livorno ; the city is more dominated by moderate socialist or social democratic parties.

Mayor of Livorno was Alessandro Cosimi from the Partito Democratico (PD) from 2004 to 2014 . In the parliamentary elections of 2008, the Partito Democratico of reaching Walter Veltroni in Livorno has a voting share of nearly 55 percent, the Popolo della Libertà of Silvio Berlusconi 24.4 percent. With its electoral alliance La Sinistra - L'Arcobaleno, the traditional left had to accept a historic low with a vote share of only 5.5 percent, after the parties united in the electoral alliance had a total of 18.6 percent in the 2006 parliamentary elections.

In the 2014 local elections, Filippo Nogarin from MoVimento 5 Stelle M5S was elected mayor with 53.06% in the runoff election against Marco Ruggeri (PD). Since then, M5S has also had an absolute majority in the municipal council.

In June 2012, Livorno signed a cooperation agreement with the Bulgarian port city of Burgas in the fields of culture, economy, education and sport. 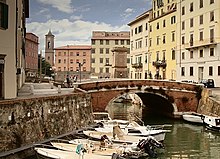 Livorno lost a large part of its historical building fabric in the Second World War, but the city complex built under the Medici is still easy to recognize. The old town is enclosed by the moat Fosso Reale and is divided by the arcaded main shopping street Via Grande . The Venezia Nuova district (laid out in 1629) still has many old buildings (including former warehouses) and is criss-crossed by canals reminiscent of Venice . Furthermore, buildings from the Belle Epoque have been preserved, especially villas on the Viale Italia promenade in the southern districts of Ardenza and Antignano .

View from Fortezza Vecchia over the harbor and downtown Livorno

Other buildings and sights

The cuisine of the city of Livorno mainly offers fish dishes. It has also been influenced by the different groups of people who mixed in the city. The most famous dish is the Cacciucco fish stew . Next specialties are Bordatino (vegetable stew with polenta), Riso al nero di seppia (Black risotto with cuttlefish ), stockfish and Stoccafisso ( codfish ). Triglie alla Livornese are red mullets in a tomato sauce flavored with peperoncino . A popular snack is the Torta di Ceci , which is sold like pizza. The Roschette (donut rolls) were originally a Jewish Passover dish. Another typical specialty of the city is Ponce alla Livornese , a strong coffee with rum.

→ Main article : List of sons and daughters of the city of Livorno

Municipalities in the province of Livorno in the Tuscany region